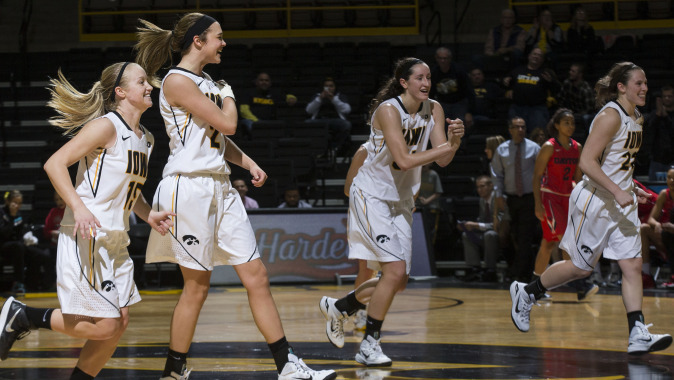 THE SETTING:
The 17th-ranked University of Iowa women’s basketball team (4-0) continues its stretch of playing five games in nine days this week, hosting UNI on Tuesday at 7 p.m. (CT) on Mediacom Court at Carver-Hawkeye Arena.

The Hawkeyes then travel to the South Point Thanksgiving Shootout in Las Vegas, facing Arkansas on Friday (3 p.m. CT) and Gonzaga on Saturday (5:30 p.m. CT) at South Point Arena. Both teams are receiving votes in this week’s AP Top-25 poll.

TELEVISION:
Tuesday’s contest can be seen locally in the state of Iowa on Mediacom Connections (MC22) and also via BTN Plus. Rob Brooks and Shelley Till will call the action.

AUDIO COVERAGE:
Brent Balbinot and Kristi Faulkner will call Tuesday’s game for the Hawkeye Radio Network. Hawkeye fans can listen to the contest on AM-800 KXIC in Iowa City, AM-600 WMT in Cedar Rapids, AM-1040 WHO in Des Moines (and other Hawkeye Radio Network stations), or on the Hawkeye All-Access page of hawkeyesports.com. Balbinot and Till will call the action from Las Vegas.

ANOTHER TRIPLE-DOUBLE:
Senior Samantha Logic notched her fifth career triple-double on Saturday, tallying 12 points, 11 rebounds, and 10 assists to lead Iowa over Dayton in the Hawkeye Challenge title game. She is tied for the fifth-most triple-doubles in NCAA history, and the most by any player as a member of the Big Ten. Suzie McConnell of Penn State (1985-88) and Louella Tomlinson of St. Mary’s (CA) (2008-11) hold the career record with seven. Stanford’s Nicole Powell (2001-04) and Alyssa Thomas of Maryland (2011-14) both posted six in their careers. Logic, Joskeen Garner (Northwestern State, 1993-96), Shalee Lehning (Kansas State, 2006-09), and Brittney Griner (Baylor, 2010-13), all have five career triple-doubles.

SCOUTING ARKANSAS:
? Arkansas is 4-0 on the season and receiving votes in the latest AP Top-25 poll. The Razorbacks enter the week with wins over Nicholls State, Savannah State, Middle Tennessee, and Northwestern State.
? Arkansas finished 19-11 in 2013-14.
? Jimmy Dykes is in his first year as head coach of the Razorbacks.

HAWKEYES 17TH IN RANKINGS:
Iowa is No. 17 in the Associated Press Top-25 poll and No. 18 in last week’s USA Today Preseason Coaches poll.

LOGIC NAMED TO B1G HONOR ROLL:
Samantha Logic was named to the Big Ten Player of the Week Honor Roll on Nov. 24 after recording her fifth-career triple-double with 12 points, 11 rebounds and 10 assists in the Hawkeyes’ comeback win over Dayton. Logic was named the Hawkeye Challenge MVP after guiding Iowa to victories over Pepperdine and Dayton, averaging 12.0 points, 8.5 rebounds, 9.5 assists and 2.5 steals per game.

IOWA WINS HAWKEYE CHALLENGE:
The Hawkeyes defeated Dayton, 90-83, in the Hawkeye Challenge title game on Nov. 22. Iowa defeated Pepperdine, 97-68, in its opening game on Nov. 21. Samantha Logic was named tournament MVP, while Ally Disterhoft and Bethany Doolittle were named to the all-tournament team.

Iowa is leading the Big Ten in scoring offense (94.8).

UP NEXT:
Iowa travels to No. 12 Louisville for an ACC/Big Ten Challenge matchup on Dec. 4, before hosting Colorado on Dec. 7.