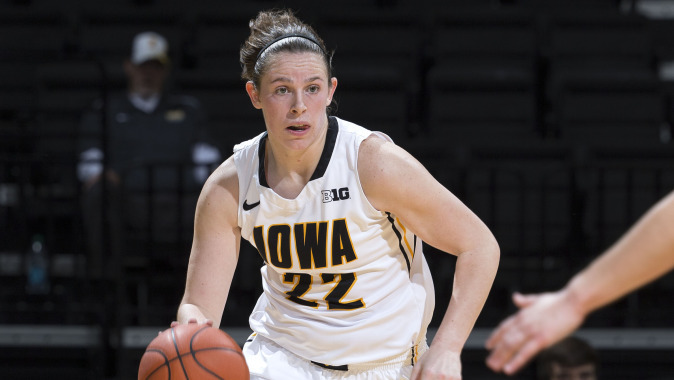 Monday, Logic was named to the John R. Wooden Award Women’s Preseason Top 30 list, comprised of the early front-runners for college basketball’s most prestigious honor. The list is chosen by a preseason poll of national women’s college basketball media members.

Logic, the NCAA’s active career assists leader (659), ranks seventh in assists in Big Ten history. She leads the NCAA in the category this season (9.3), while also averaging 10.5 points and 8.5 rebounds per game. Logic was named to the Big Ten Player of the Week Honor Roll today for her efforts in the Hawkeye Challenge.

Now in its 38th year, The Wade Trophy is named in honor of the late, legendary Delta State University coach, Lily Margaret Wade. During her six seasons as head coach, Wade won three consecutive national championships with the Lady Statesmen and recorded a career record of 157-23.

Regarded as “The Heisman of Women’s Basketball,” The Wade Trophy is presented annually to the WBCA NCAA Division I Player of the Year by SHAPE America – the Society of Health and Physical Educators and the WBCA. The 25-member list is made up of top NCAA Division I student-athletes who best embody the spirit of Lily Margaret Wade according to the following criteria: game and season statistics, leadership, character, effect on their team and overall playing ability.

No. 17 Iowa (4-0) hosts UNI on Tuesday on Mediacom Court at 7 p.m. (CT). Tickets are available by visiting the ticket office at Carver-Hawkeye Arena, calling 1-800-IA-HAWKS, or online at hawkeyesports.com.