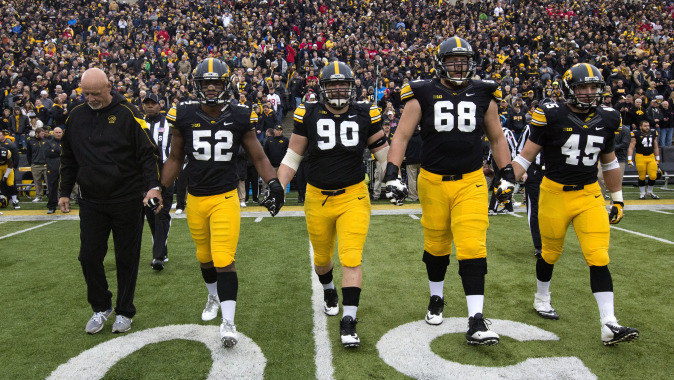 IOWA CITY, Iowa — Friday’s Hy-Vee Hereos Game against Nebraska will be an emotional and important game inside Kinnick Stadium.

The University of Iowa football team will recognize its 16 seniors in a pregame ceremony before the Hawkeyes take the field looking for win No. 8.

Senior Mark Weisman doesn’t want to think about his last time running out of the tunnel in the Swarm.

Senior John Lowdermilk says he will have to control his emotions

Senior Ray Hamilton has seen how the five-minute ceremony can be gut-wrenching, and knows the Hawkeyes will need to snap out of it and stay focused on the task at hand.

“It’s kind of surreal that it’s the last one in Kinnick,” said Weisman. “It has been a great ride. I don’t know if there is any way to describe it. It has been the best time of my life.”

Weisman says the experience for all 16 seniors has been rewarding.

“Every senior that is coming out here, it’s special whether you knew their name from the start or didn’t know their name until 4-5 weeks ago like Tommy Gaul,” said Weisman. “Everyone has their own story, and to make it to be a senior is a special thing.”

Hamilton says he has created a lifelong bond with his Hawkeye teammates during the past four seasons.

“I know it’s cliché that you come to college and make your best friends, but that truly is with the football experience and how tough and challenging it is,” he said. “It’s a good challenge and a tough experience. But we love it because we’re brothers.

“During the offseason, getting up at 5:30-6 a.m. and partaking in the toughest strength program in the country with coach (Chris) Doyle. I wouldn’t trade it for the world; I wouldn’t change anything that has happened here.”

Hamilton says the Iowa football program taught him things beyond the X’s and O’s and made him appreciate more than the results. The life lessons are what will stay with him long after his football days are complete.

“Football is going to end someday for everybody, regardless of who plays at the next level and for how long,” he said. “This is something special here that the coaches prepare you for with those life lessons that propel us as men into society after football.”

Once the whistle blows and the opening kickoff is in the air, the Hawkeyes will set out for No. 8 and aim to hoist “The Heroes Trophy” for a second-straight year.

“It’s the way we like it,” said Hamilton. “As a group of seniors, we don’t want to go out against anybody but a good tough opponent like Nebraska. Once the pregame ceremony is complete, you have to snap back in because we have a game to play and a win for us to get No. 8.”

“It’s big, we want to go out with a win,” said Lowdermilk. “Nebraska is a rival, and we want to beat them. It will be big for the seniors to win their last game (in Kinnick).”

Friday’s game will be televised on ABC with Bob Wischusen, Matt Millen, and Quint Kessenich on the call.