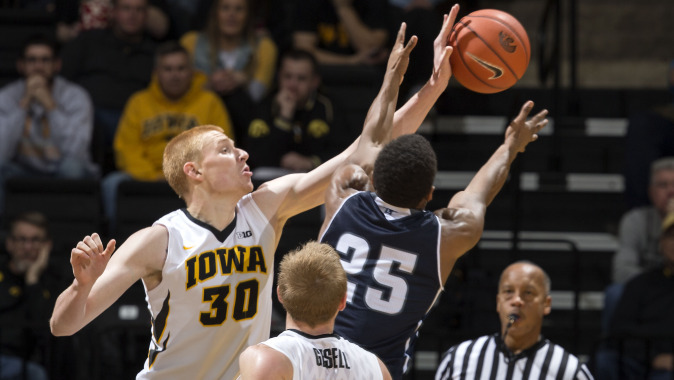 Q. What did you take out of this week? You get three wins, kinda got defense going. What is the take away from these three games?
COACH McCAFFERY: It’s been a tough week stretch, I should say. We have 19 straight days where we haven’t had a day off. We will have a day off tomorrow. So I think physically it’s been draining, but I think we really locked in to the game plan in these three games. Obviously we didn’t shoot well in the first half. We had to be locked in defensively to have the lead. I think our attention to detail has been good. We’re still getting good stuff from a lot of different people. That’s who we are. Our guys, they compete. 21 assists today, you know, 14 offensive rebounds, 9 blocks, it’s the kind of team we are, 9 for 30 from three doesn’t look good, but they played zone. I would be more upset if we were taking bad three’s. Josh took a deep one; he was open, but he was really deep, and other than that, we had clean looks. Obviously I wish we would have shot it a bit better but played well enough to get a 30 point win.

Q. Seven turnovers is probably a number that you like, too?
COACH McCAFFERY: Yes. Although in theory when a team plays predominantly zone, you shouldn’t turn it over, and that was one of the things that I I don’t remember the number but against Syracuse, they’re longer, obviously but you really should come down and get a shot. If you don’t make it, you don’t make it, but you should get a shot when a team is playing zone.

Q. Mike struggled offensively. He does have, like, 1 turnover, but he’s had 1 point the last two games.
COACH McCAFFERY: He had great energy at the start of the game. He was getting the ball in the paint. He had a couple really clean looks at three early, and they didn’t go, and then he got kind of a little gun shy, I thought, and then he missed a pull up, which he normally makes. I kinda wanted to get him back in and kinda get him going a little bit but at that point we were up 20 points, and I thought Trey did some really good things, so I wanted to keep him in there.

Q. You had Dom out there for extended minutes.
COACH McCAFFERY: I thought that was really good. I mean, he was guarding a guy that can really go off the dribble, Shaquille Johnson is a really good player, really talented, you know, a high level athlete. He’s herky jerky, he’s going to go, he’s going to spin on you, and Dom moved his feet and got big, and I thought did a really good job. I thought he was active on the glass early when we weren’t making shots, that’s what you got to be. If the shot is not goin’, we gotta get some seconds. He did that. I thought he passed it well, looking for his teammates, scoring is coming a little bit, and it will keep coming.

Q. How do you think Mike and Adam will handle playing against their old teammate on Wednesday?
COACH McCAFFERY: I don’t think that will be a factor. I think, you know, the magnitude of the game itself is, I think, going to supersede that. I know they all love each other. They’re close, their families are close. They follow each other, they root for each other. It’s an incredibly respectful relationship. But that’s one night where we’re going to try to beat them, they’re going to try to beat us.

Q. I’m sure you would have liked to have more time to establish a relationship in the recruiting process with Marcus.
COACH McCAFFERY: We established one pretty quickly. You know, I think we had a good relationship. A little bit longer, you’re right, would have helped, would have helped. But a little longer would have given him an opportunity to see where we were going with the program. I think it was two fold. He need to do get comfortable with us and he needed to get comfortable with where are they going, because if he didn’t like where we were going, wouldn’t have mattered how much he liked me. So he needed to believe in me and believe in us. It was an easier call for him at that time.

Q. Has Gabe made arrangements to go back home yet?
COACH McCAFFERY: He has not, no.

Q. How did Brady react, his foot react the other day? Seemed like he was fine today?
COACH McCAFFERY: It’s not 100%. What we’re going to have to decide is can he get to 100% or is he going to have to deal with a little bit of discomfort? That’s where we’re at. He moved better today than I thought he did the other night. He’s not anywhere near where he needs to be. But what you can see is he knows how to play. He’s always in the right place. He finds people. He’s in the game, what, how many minutes, two three’s and two assists, no turnovers, sticks his nose on the glass, he’s a really good player. There is no panic in him at all. He could be a valuable player for us so are we going to keep him in there or shut him down at some point because he still has a little bit of pain.

Q. Gabe has had two special games in a lineup of personal tragedy. Does that give you a glimpse of what makes that guy tick?
COACH McCAFFERY: He’s so incredibly focused, and the it’s across the board. It’s how he lives his life. How he prepares academically, he’s always on time, he’s always early, he’s a great teammate, he reads the scouting report, processing the scouting report and seems to keep getting better as a basketball player. It got to the point in the summer, Rick, where I wanted to throw him out of the gym, he’s in there three times a day, you’re going to start wearing down and your body is going to wear down because you’re in there so much. But he wants it so bad! His dad wanted it for him! His family wants it for him, because they recognize his approach, so they’re kind of all in. I couldn’t be more proud of him.

Q. Shooting-wise, obviously Brady brought a spark there but when does that become a concern?
COACH McCAFFERY: Well, we’re the kind of team, Jared is 3 for 5; Josh 3 for 6; and Brady 2 for 3, so we had three guys shooting it, the others guys were not. Mike and Anthony were Oh fer; right? Pete hit one; he was 0 4 from the three. You would like a little bit more balance. We had three guys shooting it; four guys that weren’t. We got a lot of guys who can shoot it. Hopefully those guys are close. Good to see Josh get going. Four assists, no turns, I mean, that’s the kind of player he is.