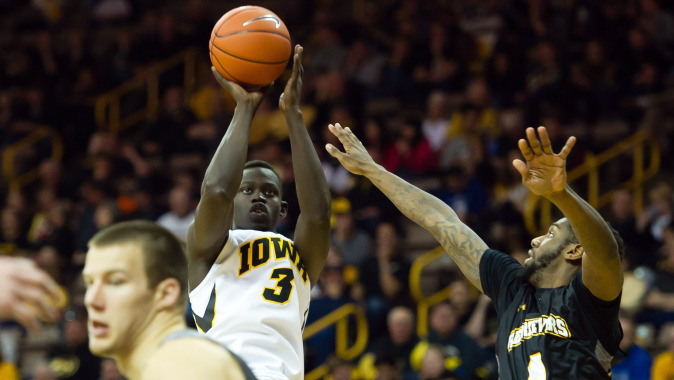 Q. You finally got Peter Jok in there early and he got going tonight.
COACH McCAFFERY: Yeah, he’s been really flawless. He’s had some great workouts. He shot it really well after we got back and it’s great to see him get going and the guys look for him.

Q. (No Microphone) you got the sense that the five bench guys did 20 minutes or more. Is that for the experience factor trying to build for the future?
COACH McCAFFERY: Yeah, you know, you’re right. I’m a little disappointed that we were seemingly content to trade baskets in the second half, and that happens sometimes. You’re up 30, and you don’t play with that same sense of urgency that you need to. But that’s what those guys need to play with, especially the young guys, because, you know, what that means is am I going to put them in in the big games that are coming up. That’s how you earn playing time. You come in there, and you lock into the game plan and you rebound the ball and you don’t turn it over, maybe you make some baskets, maybe you don’t. But you defend, you rebound, and you don’t turn it over, like I said, if you do those things, you can stay on the floor.

Q. (No microphone)
COACH McCAFFERY: I thought we were too casual in that period of time. I get it. But when you come in, you’ve got to come in and we’ve got to execute. Man or zone, I mean, they were going back and forth. If we’re zone, we’re running this. If we’re man, we’re running that. Let’s move, let’s screen, let’s cut, let’s space, let’s share the ball. Let’s get on the glass if we’re missing jumpers. We made some. We missed a bunch, so let’s go get it back so they can’t run. They want to run. You’ve got a driver shot picking you at the three point line, don’t go for it. Okay? You can’t lapse into that kind of mentality, and we were doing that. I thought we got better. I thought Trey in particular and Dom, both, after that timeout were substantially better. I’m proud of them.

Q. After a big road win at North Carolina this last week, were you happy overall?
COACH McCAFFERY: Well, I was very happy because I felt we got back late, and we didn’t do much, obviously, on Thursday. But Friday we got after it a little bit and we got ready. You could tell they were going to be ready for this game. It was not going to be a letdown or anything like that. The way we started the game 26 6, I think it’s safe to say that defensively because we weren’t shooting it that well during that period, but we stayed after them and turned them over and got some transition opportunities, so that was good to see.

Q. What do you like from Dom so far?
COACH McCAFFERY: He’s got a unique skillset. He’s a high level rebounder. He can handle the ball, and he doesn’t panic when he’s out there. He can find people. I thought the high low pass that he threw too hard to Gabe was a great look. I put him in the high post to make that play. Like to see him have an assist there, still learn. His shot looks good. He’ll make some shots, and he’ll start finishing some plays. He had the dunk. He got to the free throw line. I mean, you can tell that he’s almost there. He’s not there yet.

Q. In North Carolina he took the three pointer. Are you happy he had enough confidence to take it in that situation?
COACH McCAFFERY: Yeah, you don’t ever want him to get gun shy on that. You want him to keep shooting if it’s open. If it’s in the flow of the offense, he’s got the green light to shoot the ball.

Q. Is Gabe going to wait until after the semester (No Microphone)? He still seemed like he was locked in.
COACH McCAFFERY: Yeah, but I will tell you this, it all hit him Wednesday night in the locker room. I mean it was kind of a unique locker room. It’s about as happy a group as I’ve ever been around in all my years playing and coaching. Yet he was bawling his eyes out. His teammates had their arms around him. The guys are dancing and they see him, so it was a little more about him at that point than anything else. You can only imagine what’s going through his head. Do I go? Do I stay? When do I go? Talking with his family and we didn’t put any pressure on him. You go when you want to go and you come back when you want to come back. It’s that simple. He wanted to play in that game, and he wanted to impact that game, and he did. Then we win. So, as you can imagine, it was pretty emotional for him. He was, I don’t think he was off the floor yet and he was bawling all the way down the tunnel and into the locker room.

Q. How close is Oglesby?
COACH McCAFFERY: Really close. I’m surprised that he was he was just off a little bit for a couple games. I mean, he’s got too much talent. He’s got as pretty a stroke as I’ve seen. He’s got great confidence in his ability to score. He can attack and get to the free throw line. I think what’s been impressive to me is he’s been really active defensively. He’s really locked in, and he’s not breaking down at all. So when he’s out there, if the shot’s going, he’s really good. If the shot’s not going, he’s still playing like an experienced player that can help you win, and that’s what you have to be. That’s where Josh is. Josh’s shot is not falling. But for the most part, he finds his teammates. He doesn’t turn it over. He guards his man. He knows what we’re running. Whatever we call, he’s always in the right place to help his teammates. But when his shots start going he’s better, of course. So far he’s doing just fine.