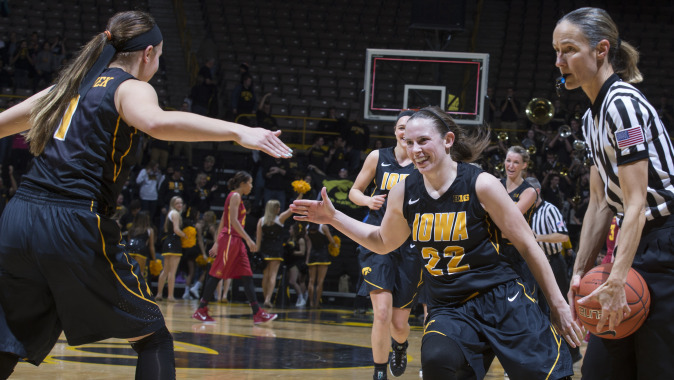 COACH BLUDER: That was just a really fun, in state game. I thought we kept our focus the entire time. Iowa State kept battling the entire time, even though we led over 38 minutes of this basketball game. But obviously we shot the ball very well the first half, and the second half we did a much better job of boxing out and crashing.

I thought a lot of really good performances. Whitney Jennings has two steals in the last minute and goes three for four from the free throw line, in the last one minute of play. And she did the same thing against Colorado, got her hand on a lot of loose balls. Ally (Disterhoft) shot the ball well. Kali Peschel came in and played great for us; five offensive rebounds, three for four, shooting perfect from the line. Claire Till gave us some valuable minutes tonight.

And I thought our fans were great tonight, too. I thought they did a super job of helping us stay energized in a really hard fought game.

Q. What was it like to see players from the bench players like Kali make some big shots? What’s it like when you can have the bench contribute like they did tonight?
COACH BLUDER: It’s wonderful to be able to have people come off the bench and give you that spark. Lex (Alexa Kastanek) I thought also did that for us tonight. She had a couple of big threes for us and she did a good job, as well, so our bench really came through for us tonight.

Q. Talk about the offensive rebounds, did you feel like you dodged a bullet, giving them shot after shot that they couldn’t convert?
COACH BLUDER: Yeah, and sometimes that happens with offensive rebounds. You’re missing, they rack up a lot of them, because it’s kind of just right back to them, right back to them, because you don’t have position obviously. We made more use out of ours than theirs. We did a much better job crashing in the second half. I was really happy with that. And again, Claire and Kali and Ally did a great job with that.

Q. How impressed have you been with this non conference stretch we talked about? This was a tough one, you had the Vegas tournament, Iowa State and then Colorado come into time. How impressed have you been how they have responded in this tough non conference stretch?
COACH BLUDER: I think we really challenged ourselves with the non conference schedule. Our goal is to get ready for the Big Ten but our goal is also to get quality wins for that selection committee so that we have that opportunity to maybe host at the end of the year. That’s the ultimate goal, and I think that we are doing a pretty good job of getting there.

Q. You have a week break. Talk about what you’re looking for from the team.
COACH BLUDER: Finals week, and so there is nothing better to go into finals week with a win. Players can enjoy the win for a long time. They don’t have to sit on it and think about it, and so they can focus on their finals and that’s going to be really important.

We have obviously Drake next Sunday, so we have the end of the week next week to prepare for them. But it gives us a few days right now to go back and work on some fundamentals, make ourselves better, and we haven’t had that opportunity since preseason. So I’m looking forward to some of that time, but also giving them some time off for finals. We are not going to practice Monday or Tuesday.

Q. You talked about all the similarities between the two teams this week. Did you feel like a performance out of a player like Kali is the difference?
COACH BLUDER: I always think our bench can be a factor. I think Lex and Kali have proven it. I know, like you said, that she has only made two in games. She makes them in practice all the time. It’s never an issue.

Lex is shooting the ball really well, too. We keep field goal percentage shooting for every single practice, and these guys are shooting really well, so I have a lot of confidence in them.

Q. When you have a team that’s pass perimeter oriented like Iowa State, how does that affect how you defend a team like that and how does it affect your game plan?
COACH BLUDER: Well, I’m a little disappointed we didn’t get Beth some more looks, you know, going against their post. But they were sagging off us; it is harder to pass the ball into the post.

Q. How key was it to get Williamson in foul trouble?
COACH BLUDER: I thought that was huge in the first half. I mean, you put those two players on the bench with fouls, I think that was tremendous, and then they protected them with the zone in the second half, until we finally got them to come out of that. So I think that was really important.