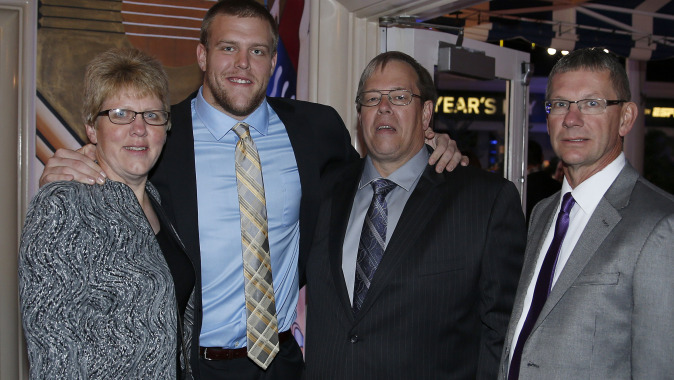 ORLANDO — Bob and Cindy Scherff raised four children in Denison, Iowa, with a consistent message for all of them: Hard work pays off.

“Hard work does pay off,” his father Bob said Thursday at the Home Depot College Football Awards show. “Brandon has worked hard and you see tonight what happens. It’s a terrific feeling. Hard work pays off, that’s what we tried to teach all of our kids.”

“Our goal for all of them was to be a successful adult,” Cindy said.

According to Bob, Brandon always had a ball in his hand and always tried his best. When Bob got off work, he would spend time with his children, often taking Brandon to the school football field to retrieve punts, passes, and kicks.

“It was a lot of fun,” Bob recalls. “We played with all of our children and tried to do as much as we could with them. You have to make time.”

Every day when Morgan arrived, he walked around the sidewalk before he entered school, Wiebers said. When a coach from a rival school showed up, he cut across the grass and came in the door.

“I said, ‘Bob, there are little things I picked up,'” Wiebers said.

In the end, the right thing for Brandon was the University of Iowa. He has started 25 consecutive games, was twice named first-team All-Big Ten, earned the Rimington-Pace Offensive Lineman of the Year this season, and has been named first-team All-America by four outlets.

“It feels great, but all the thanks to my coaches, family, and teammates for pushing me every day and not letting me get off track,” Scherff said.

If Scherff would have left for the NFL after his junior season, it wouldn’t have been a popular move with his parents.

“A degree and education is important,” Bob said. “If he would have left a year ago, he may never have gotten a degree finished. Now he has it finished and he can move on.”

The Hawkeyes will play one more football game with their most recent Outland Trophy winner in the lineup. Iowa and Tennessee tangle in the TaxSlayer Bowl on Jan. 2 in Jacksonville, Florida.