Focus on Finals, then Volunteers 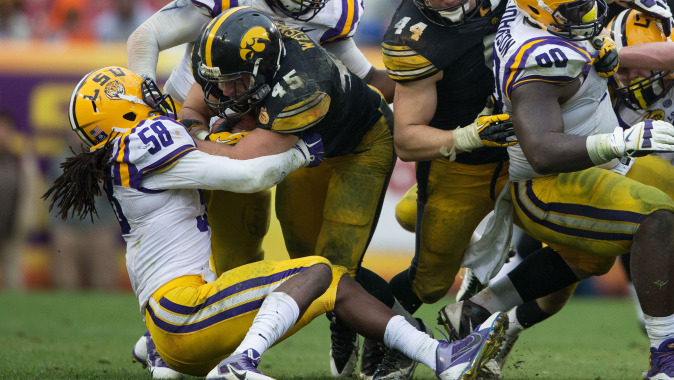 IOWA CITY, Iowa — The sound of pads popping Sunday in Kinnick Stadium is replaced by computer keyboard clicks in libraries this week as University of Iowa football student-athletes join their peers around campus for Finals Week.

The Hawkeyes concluded their second weekend of drills leading up to the TaxSlayer Bowl on Jan. 2 with a rare outdoor appearance in Kinnick Stadium on Dec. 14.

“It’s nice to get out here and get some fresh air,” said UI senior running back Mark Weisman. “At the end of the season we were practicing and shivering in 15, 20-degree weather. You never know what kind of weather you’ll get in the Midwest.”

Weisman led the Hawkeyes to a 7-5 record by rushing for 802 yards and 14 touchdowns. He knows how to get it done on the field and during Finals Week. The native of Buffalo Grove, Illinois, holds a 3.32 grade-point average (on a 4.0 scale) and will receive a bachelor’s degree in health and human physiology with a certificate in entrepreneurship. Weisman was named second-team Academic All-America by the College Sports Information Directors of America.

“I’m pretty-much done with undergrad, who knows when I will do grad school,” Weisman said. “It is crazy how fast it went.”

Weisman plans to attend graduate school at some point (he is interested in strength and conditioning), but that will come after the TaxSlayer Bowl and a possible detour to the National Football League.

Iowa has eased into its bowl preparation with workouts only on weekends until the semester ends.

“We’ll worry about Tennessee when that time comes next week,” Weisman said.

Weisman was absent from the annual team awards banquet Dec. 7 because he was in Springdale, Arkansas, as one of three finalists for the Burlsworth Trophy. The award is presented to the outstanding football player in America who began his career as a walk-on.

“It was great, Southern hospitality,” Weisman said. “I met some very nice people.”

While East Carolina senior wide receiver Justin Hardy received the 2014 Burlsworth Trophy, Weisman was racking up hardware in Iowa City, thanks to votes by his teammates and coaches.

“It is an honor, but I’m uncomfortable when people are talking nice about me or when I have to talk about myself,” Weisman said. “It is a team thing; I appreciate all the awards, but all that matters is winning.”

The TaxSlayer Bowl will be Iowa’s 12th bowl game in the last 14 seasons. For Weisman, it will be his 36th — and final — game in a Hawkeye uniform.

Weisman rushed 18 times for 37 yards and a touchdown during a 21-14 loss to Louisiana State University in the 2014 Outback Bowl.

To order tickets to the TaxSlayer Bowl, click HERE.