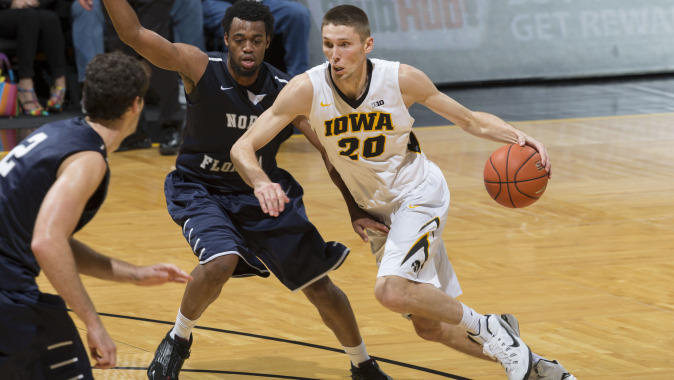 Q. You talked about the free throw line. Obviously you were outstanding there.
COACH McCAFFERY: You know, we try to be outstanding there every night in terms of getting there. You don’t always go 26 for 28. We wanted to get there. We wanted to throw it inside, drive the ball. This is a tremendously talented team, incredibly well coached team. I really think they can win that league. I watched every game they’ve played. They don’t go away. They just keep coming. They’ve got shot makers, they’ve got drivers, post players, a good player that didn’t play. So they’re going to be really good. So we felt like we had to grind it a little bit more, go inside, go off the dribble, get them in a little bit of foul trouble and make sure we were going to bonus late when they start fouling. You got the lead, you have to be able to step up there, got two shots.

Q. Josh got some threes. Can you discuss his defense the second half.
COACH McCAFFERY: His defense is usually really good. I’ve said that before. It was really good. When they start running all that ball screen stuff, they do a really good job with it, okay? Ball screen rollover plays, rescreen, flip screen, on the side, in the middle. It creates a lot of decisions that your other players have to make. We try to simplify it and say that, Okay, whoever is involved in the ball screen, those two guys are guarding that action, we’re staying home on the other guys. In the first half we kept helping, which is normally what you do, if the guy turns the corner. He got going. The upsetting thing was he hit five last game, he hit five the game before that, then he hit six. Obviously, if he gets six more in the second half, we’re going to have a hard time winning. They still made 12. Usually if you look at that number and say, His team made 12 threes, you ain’t winning. We out rebounded them, we turned them 20 times, and we shared the ball. A lot of guys stepped up.

Q. Is it puzzling in any way your team shot 38%, but you made 26 of 28 free throws? It’s all shooting. Does it compute in your mind how that happens?
COACH McCAFFERY: We got tentative in that one stretch I thought offensively. We start the second half, we got a stop, don’t get a score. Get a really good look at it, doesn’t go in. Made a couple shots, they get going a little bit. That was disappointing, because then we got tentative with our offense. We turned some shots down, then forced the ball. We had three or four just goofy turnovers. Gabe throws it out of bounds. Woody throws it to the other guy. The other one, I forget who threw it right at Pete’s feet, goes out of bounds. You got to keep them down, come down on defense, get a shot. So I think it’s a combination of things. But we got to do a better job. We’ve got to get stops at the start of the second half. We can’t give, what did they shoot in the second half, 50 some percent, 52 percent. If you look at our four losses, it was I think 57 percent in the second half we gave up. If you take out the Syracuse game, I think it’s 60, 62. That’s hard to win. So it’s something we’re really trying to address. Like I said, there’s ways to do it. You address what you do defensively and offensively. Run more sets, change personnel. Do you change the defense? Do you press more? Do you zone more, whatever? Those are all things we’re trying to figure out. But when it’s all said and done, those guys just have to compete and get stops and grind the offense. If we don’t score, run back and grind it defensively so that they don’t score, ’cause that’s what the real good teams do.

Q. Pretty impressive, five steals.
COACH McCAFFERY: His energy level I really thought was what was the difference in the game. He was all over the glass, he was all over the floor. What we kept doing on the bench was recognizing his energy level. We got to get him out, even if it’s for a minute, get him out, put him back in, get him out, put him back in. What did he play? 32 minutes. I think Aaron White is a 30 to 34 minute player. When he does that, he’s great. If I start playing him 36 to 38 minutes, I think that’s too much.

Q. Coach was in here and actually gave sort of an analysis of what he thinks your team needs. He noticed in body language if your shooters miss shots they get down. What can you do about that to fix that? Do you think that’s accurate?
COACH McCAFFERY: Well, yeah, it’s accurate. He’s a really good coach. He’s been around. I’ve known him a long time. He’s done a terrific job there. I guarantee, he’s watched every one of our games probably twice. So he is qualified to make those remarks. But, I mean, so are you. You’ve seen it. I think in particular with guys that know they’re really good shooters that aren’t making shots, they tend to (hang head low). All I ask you to do is keep battling defensively, don’t turn it over, and make sure you take good shots. I tell them to keep shooting. We set those guys up. So I keep coming to you. I don’t take the green light off you. But don’t start hunting shots, don’t start driving into packs of people and turning it over, don’t become something you’re not. At some point you got to step up and make shots, like what Josh and Pete both did tonight.

Q. Gabe played seven and a half minutes straight in the second half. His stamina is good. Conversely, Adam got a little sideways for probably the second game in a row.
COACH McCAFFERY: Adam in the first half was a force defensively. Eight rebounds. He had impact on this game. He got a little tentative with the ball. What Adam is trying to do is make sure that he makes a good play. If he gets a tenacious offensive rebound, he doesn’t see the weak side guy coming, make sure that guy doesn’t get blocked, shot fake it, got to the free throw line early twice. Get some payback off of that energy and throw the ball out to our best shooter. That’s what he was trying to do it when he turned it over. Gabe ran the floor, he rim protected. Woody, like I said, impacted the game. What he’s going to do, he has to play with the swagger he usually plays with. Be an energy guy, rebounder, defender. Shoot your face up jumper. No dipsy doodle jump hooks from 12 feet. That’s not his game. His game is power, impact with his energy and his toughness, and he’ll be fine.

Q. Eight days till you open Big Ten play. What will the schedule be like?
COACH McCAFFERY: They’re going home for a couple days. I think we get them back here on the 26th.

Q. How do you feel about your team right now done with non conference play?
COACH McCAFFERY: I feel good. I feel good about where we are health wise. I think we’ll get Clemmons healthy. He’ll be healthy. We’re getting a lot of productivity from a lot of people. Our defense has been good. It’s got to be better in the second half against good teams. Every team we play from here on is really good. So we got to address that. Does that mean we change defenses more, whatever, we’ll think about that.

Q. It’s a little early, but do you see yourself keeping Pete in the starting lineup at this point?
COACH McCAFFERY: Not sure yet. Not sure yet. I would feel comfortable doing it. I like having Clemmons coming in. He can play either spot.

Q. Regarding the Big Ten, it’s been an interesting non conference season with a lot of unusual losses. You didn’t suffer any of those. Can you give a big picture analysis of where your team fits in that picture?
COACH McCAFFERY: I think that’s a very hard question to answer. I think what will unfold is what unfolds. I don’t know if you want to overanalyze those scores. It’s not typical, right? I would agree to that. We pride ourselves into really competing. We amped up our non conference schedule. There’s no question about it. We were ready to go. I thought we’d have one or two more wins probably at least, but I have tremendous respect for the people who beat us, okay? They were really good. We had a signature road win. When you schedule Hampton, very good chance to win their league. When you schedule Pepperdine, very good chance they’re going to win their league. When you schedule North Florida, very good chance they’re going to win the Atlantic Sun. Their RPIs are all up. Hopefully that’s going to help us and pay dividends down the road. As far as it relates to the conference, it’s not like you look at somebody and say because they lost to a team they’re not what we thought they were. Top to bottom, this league is going to be brutal. You look at Penn State, they’re 12 1. Maryland, people don’t really know what to make of them. They’re beating people with Dez Wells out, their best player. That team, they’re a top 15 team for a reason. That’s what our league is. We got some new people. So sometimes you slip up. You lose in overtime. But won’t change how we prepare, how we think.