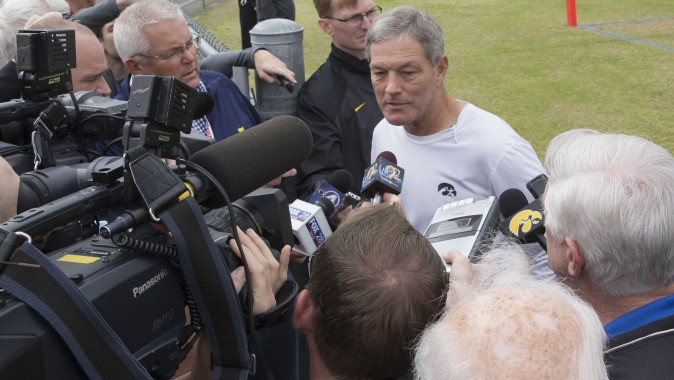 FERNANDINA BEACH, Fla. — University of Iowa head coach Kirk Ferentz announced Tuesday that junior Jake Rudock will start at quarterback for an eighth consecutive time and the 25th time in his career Friday when the University of Iowa takes on Tennessee in the TaxSlayer Bowl on EverBank Field in Jacksonville, Florida.

Ferentz named Rudock the starter and echoed what offensive coordinator Greg Davis said Monday that Rudock and sophomore C.J. Beathard would see action in the first half against the Volunteers.

“Jake will start and they will both play,” Ferentz said before the Hawkeyes practiced at Fernandina Beach High School. “I don’t think it’s a huge deal and it won’t be a huge deal for our opponent, either, when they look at us. I’ll go back to what I said in August: we have two really good quarterbacks; I wish we had this depth at every position. They both have practiced well and competed well and that’s all we could ask. Our whole team has made a good effort this month; they have prepared well.”

Iowa (7-5 overall) is making its 12th bowl appearance in the last 14 seasons; Tennessee (6-6) returns to postseason play for the first time since losing the 2010 Music City Bowl to North Carolina in double overtime.

Both teams have 16 seniors on their bowl roster, but Tennessee has used 23 true freshmen compared to three by Iowa.

“They have young guys playing, but most of those guys are four and five-star recruits,” Ferentz said. “There is a reason we redshirt our guys. We’re two different operations that way, but I don’t think anybody has an advantage. You could say they are going to be more enthused, although we’re enthused to be playing this game; we’re excited about the opportunity.”

“They would be foolish not to attack us in a similar manner,” Ferentz said. “I’m sure we’ll get tested in the same way, the question is, can we respond to that? Can we do a better job of taking away some of the things that hurt us in those two games?”

Defensively, Ferentz said the Volunteers remind him of Nebraska.

“They are talented and have good looking guys on defense,” Ferentz said. “They run around and they are pretty experienced in the secondary. They are athletic.”

Speaking of Nebraska, it is a game and outcome that has served as extra motivation during the bowl preparation period. The Hawkeyes led 24-7 midway through the third quarter, but lost, 37-34, in overtime, on Nov. 28.

“It’s not like we had a banner game that day. The shame is, we didn’t play as well as we could have,” Ferentz said. “We were disappointed with that last football game for sure. We were sloppy in a lot of areas, coaching included. The team has responded. They have practiced and competed well and hopefully we’ll be a better football team Friday than we were the last time we were out.”

This is the eighth bowl trip to the state of Florida for the Hawkeyes with Ferentz as head coach. Iowa lost to Florida, 14-6, in the 1983 Gator Bowl, also played in Jacksonville.

“I can’t say enough about the job the TaxSlayer people have done,” Ferentz said. “The hospitality has been first class and the place we’re staying (Omni Amelia Island Plantation Resort) is unbelievable. Everything has been great. The practice site is great, the guys are having a good time, and they are working hard, so everybody is getting eager for the game now.”