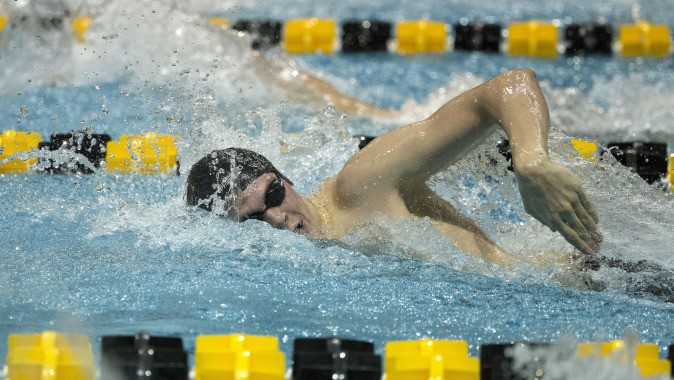 THIS WEEK
The University of Iowa men’s swimming and diving team travels to St. Petersburg, Florida, for the St. Pete’s Classic Relay on Jan. 3, at the North Shore Pool at 8 a.m. (CT).

LOOKING AHEAD
The Hawkeyes return to action on Saturday, Jan. 24, hosting Northwestern in the Campus Recreation and Wellness Center Natatorium in Iowa City, Iowa.

SCOUTING THE FIELD
The Hawkeyes join a four-team field at the St. Pete’s Invite this week competing alongside Sacred Heart, University of Arkansas – Little Rock, and South Dakota State.

BOSCHULT MAKES NATIONALS DEBUT
UI junior Addison Boschult made his nationals debut on Dec. 18, competing on the platform at the 2014 USA Winter Diving Nationals. The Omaha, Nebraska, native finished 11th after posting a score of 1,050.45 in the finals.

BETULIUS QUALIFIES FOR NATIONALS
UI senior Grant Betulius posted an NCAA `A’ cut time of 45.56 in the 100 backstroke to lead off the 400-medley relay on Dec. 5, at the Hawkeye Invite. Betulius, a native of Naperville, Illinois, smashed the previous record, held by Dustin Rhoads (46.33) and topped the pool record of 46.30 that has held since the 2012 Big Ten Championships.

A LONG WAYS FROM HOME
This year’s team will feature three Hawkeyes from overseas. Jerzy Twarowski comes to the UI program from Krakow, Poland, Roman Trussov from Ust-Kamenogorsk, Kazakhstan, and David Ernstsson from Stockholm, Sweden.

A STRONG RESUME
Freshman Jerzy Twarowski joins the Hawkeyes following a strong junior career in Poland. Twarowski was a member of the Polish Junior National team, where he was a multiple gold medalist in international junior competitions. The butterfly specialist was also a Senior National qualifier in 2014, earning gold and bronze medals at the Polish Senior Championships.

TWAROWSKI: B1G NEWCOMER OF THE WEEK
UI freshman Jerzy Twarowski was named the Big Ten Freshman of the Week on Nov. 4. Twarowski earned the accolade after a breakout meet in the dual against Minnesota on Oct. 31. The Krakow, Poland, native claimed three top finishes and swam to season-best times in the 200-yard medley relay (1:29.46), 100 fly (48.65), and 200-fly, where he touched in with an NCAA `B’ cut time of 1:47.55.