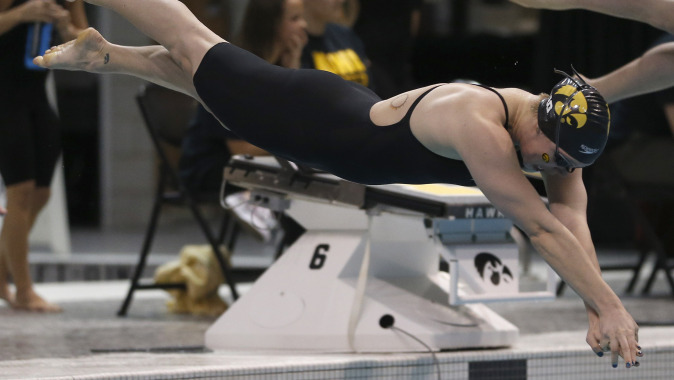 THIS WEEK
The University of Iowa women’s swimming and diving team travels to St. Petersburg, Florida, for the St. Pete’s Classic Relay on Jan. 3, at the North Shore Pool at 8 a.m. (CT).

LOOKING AHEAD
The Hawkeyes return to action on Saturday, Jan. 17, traveling to Champaign, Illinois, for a Big Ten matchup against Illinois.

SCOUTING THE FIELD
The Hawkeyes join a four-team field at the St. Pete’s Invite this week competing alongside Sacred Heart, University of Arkansas – Little Rock, and South Dakota State.

FREEMAN EARNS SILVER AT WINTER NATIONALS
University of Iowa volunteer assistant Deidre Freeman dove to a silver medal on Dec. 20, at the 2014 USA Diving Winter National Championships held at the McCorkle Aquatic Center in Columbus, Ohio. Freeman dove alongside Indiana standout Jessica Parratto in the women’s 3-meter synchro event. The two dove to a score of 563.40, finishing behind Abby Johnson and Laura Ryan (597.30).

SOUGSTAD NAMED B1G SWIMMER OF THE WEEK
University of Iowa sophomore Emma Sougstad was named the Big Ten Swimmer of the Week on Nov. 16. Sougstad earned the accolade after posting a pair of record-setting times in the dual against Iowa State on Dec. 12.

HEAD COACH Marc Long
Marc Long is in his 11th season as head coach for the University of Iowa swimming team. It’s his 10th as head coach of the combined program. During his tenure as head coach of both programs, 86 school records have fallen and 112 Hawkeyes have provisionally qualified for the NCAA Championships.