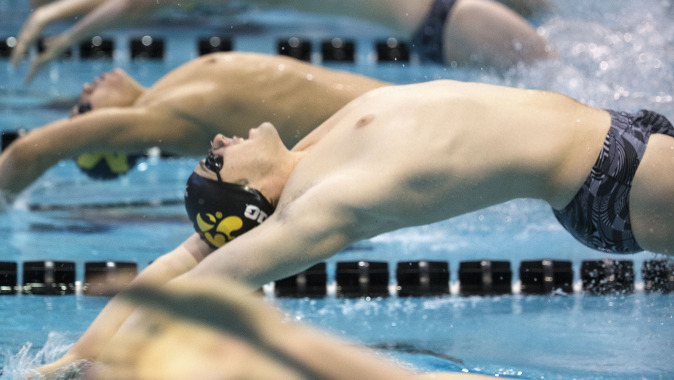 IOWA CITY, Iowa — The University of Iowa men’s swimming and diving team catapulted to 19th in the SwimSwam Power Rankings based on its performance at last month’s Hawkeye Invitational.

The Hawkeyes earned a spot in the rankings after a strong showing in their first peak meet of the season. During the competition, Iowa posted six individual and four relay times that rank among the top-20 nationally.

Senior Grant Betulius led the way, swimming an NCAA “A” qualifying time in the 100-yard backstroke, touching out in 45.56 seconds — a time that ranks No. 2 in the country. He is one of two swimmers to post an “A” time thus far in the 2014-15 season.

The 400-medley relay with Betulius, junior Roman Trussov, freshman Jerzy Twarowski, and sophomore Jackson Halsmer has the seventh-best time at 3:09.76. The same quartet is 13th in the 200-medley relay in 1:26.60.

The Hawkeyes also have two individuals both sitting in the top-18 in the butterfly and breaststroke events.

The Hawkeyes return to action Jan. 24, hosting Northwestern in a Big Ten dual at the Campus Recreation and Wellness Center Natatorium beginning at 11 a.m. (CT).