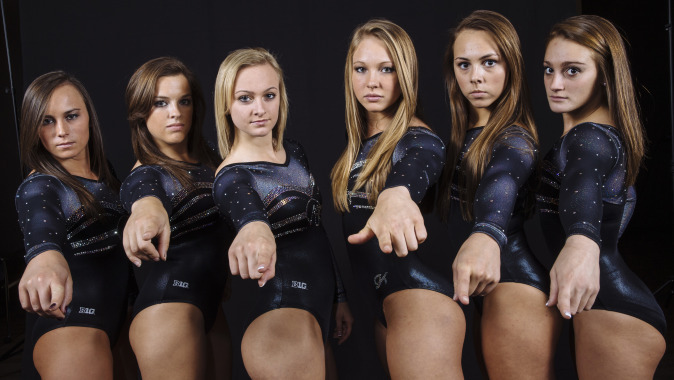 THIS WEEK:
The University of Iowa women’s gymnastics team opens its 2015 season Friday at No. 3 LSU at 7:30 p.m. (CT). The meet will be held at the Maravich Center in Baton Rouge, Louisiana.

FOLLOW THE ACTION:
Follow @iowagymnastics on Twitter for live updates, and visit the women’s gymnastics schedule page on hawkeyesports.com for links to live scoring. The event will be broadcast on SEC Network+.

IN THE RANKINGS:
The GymHawks are receiving votes in the 2015 GymInfo Gymnastics Preseason Coaches Poll.

ALMA MATER:
Iowa head coach Larissa Libby was a collegiate gymnast at Louisiana State University. She was a four-year team captain and the Central Region bar champion in 1995. Libby graduated from LSU in 1996. Before joining the Iowa staff, Libby served four years as the assistant women’s coach at LSU. While at LSU, she produced nine beam All-Americans, the top-ranked beam team in 1999, and helped coach LSU to four consecutive NCAA championship team appearances.

SCOUTING LSU:
The LSU Tigers are coached by D-D Breaux. Breaux has served as head coach at LSU for the last 37 years. LSU returns 11 letterwinners and seven All-Americans from last year’s squad that registered the highest finish in school history with a third-place result in the NCAA Super Six.

METCALF, HOERR NAMED TO BIG TEN WATCH LIST:
Angel Metcalf and Sydney Hoerr have been named to the 2015 Big Ten Gymnasts to Watch List. Metcalf, one of six sophomores to make the list, hails from Swansboro, North Carolina. She captured her third all-around title last season season against No. 20 Ohio State on Feb. 14 in Iowa’s annual Pink Meet. Metcalf improved her all-around score to 39.325. She previously posted a season best at Georgia (39.100). Metcalf received a bid to NCAA Regionals with five of her teammates to compete in the all-around. She competed in 12 meets last season, nine of which she competed for the all-around title. Her season-best all-around score of 39.325 has been tallied twice; the most recent at the 2014 Big Ten Championships.

LAST TIME OUT:
The University of Iowa women’s gymnastics team concluded the 2014 season at NCAA Regionals in Minneapolis, Minnesota, as five Hawkeyes were selected for NCAA Regional competiton. Alie Glover, Angel Metcalf, and Sydney Hoerr were selected as all-around competitors, while Jordyn Doherty competed on vault and Mollie Drenth competed on floor.

HEAD COACH Larissa Libby:
Larissa Libby enters her 11th year as head coach, and 15th year overall, at the University of Iowa in 2014-15. In 2014, six Hawkeyes were selected for NCAA Regional competition. Alie Glover, Angel Metcalf, and Sydney Hoerr were selected as all-around competitors, while Jordyn Doherty competed on vault and Mollie Drenth competed on floor. Maryah Huntley was selected as the alternate behind Drenth on floor. Libby coached Hoerr to second team All-Big Ten honors, while Hoerr, Caitlin Tanzer and Glover earned Academic All-Big Ten honors. Libby led Iowa to its sixth-consecutive NCAA postseason appearance, the seventh in her tenure, in 2013.

PRACTICE FACILITY RENOVATION:
The women’s gymnastics team is amidst a practice facility renovation. The gym — located in the UI Field House — is scheduled to be completed in February 2015.? The renovation will include new equipment, more space to train, and enhanced safety and resources for Hawkeye student-athletes.

UP NEXT:
The GymHawks host Ball State and Michigan State on Jan. 18 at 2 p.m. (CT) at Carver-Hawkeye Arena in their home opener.