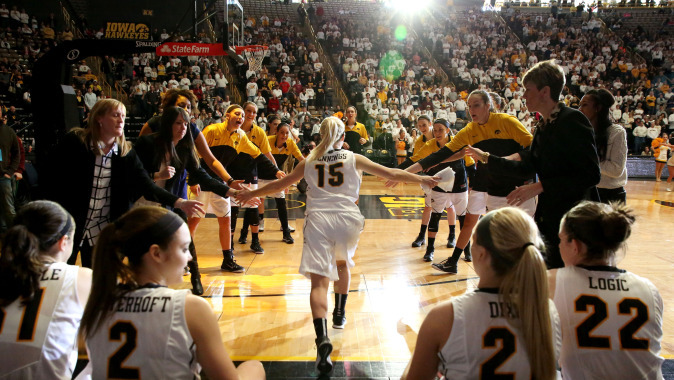 WATCH THE ACTION:
Wednesday’s contest can be seen live on BTN Plus.

SERIES HISTORY:
? Iowa leads the all-time series, 49-14.
? The Hawkeyes have won 23 of the last 25 meetings against the Wildcats dating back to Lisa Bluder‘s first season in Iowa City (2000-01).
? Iowa is 23-4 all-time against Northwestern at Carver-Hawkeye Arena.
? The Hawkeyes defeated Northwestern at home last season in the only meeting between the two schools, 90-84. UI head coach Lisa Bluder surpassed C. Vivian Stringer as the winningest coach in program history.

THE NATION’S LEADING 3-POINT SHOOTER:
? Iowa senior Melissa Dixon leads the nation in 3-point shooting, averaging 4.2 3-pointers per game, nearly one more 3-pointer than any other player. Sophie Bikofsky of Brown is second (3.46).
? Dixon has drained 31 3-pointers over the last four games (10 at Drake, 5 vs. Penn State, 6 at Rutgers, 8 at Illinois, 2 vs. Purdue).
? Dixon made six 3-pointers (6-of-10) in the win at Rutgers on Jan. 4, surpassing Lindsey Meder (261) for the most in Iowa history.
? Dixon ranks fifth in Big Ten history with 273 career 3-pointers.
? She scored 31 points in Iowa’s win at Drake on Dec. 21, making 10 3-pointers (10-of-14), setting a new school record. The previous school record was seven, accomplished five times in program history, twice by Dixon; the NCAA and Big Ten record for 3-pointers in a single game is 12.

UP NEXT:
Iowa travels to Michigan State this weekend. The Hawkeyes and Spartans meet on Sunday at 2 p.m. (CT) on ESPN2.