No. 21 Hawkeyes Set for Road Test at Illinois 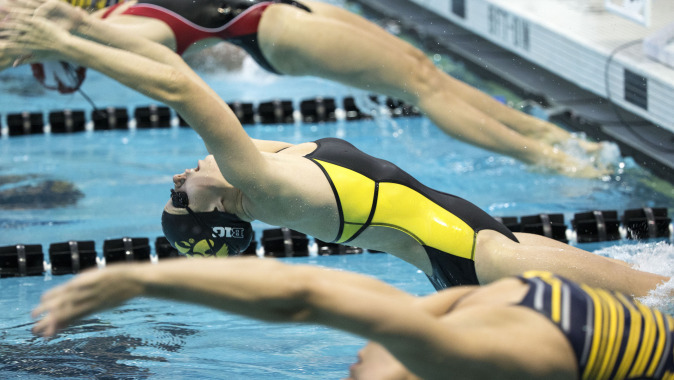 THIS WEEK
The University of Iowa women’s swimming and diving team travels to Champaign, Illinois, for a Big Ten dual against Illinois at the ARC Pool on Saturday at 11 a.m. (CT).

LOOKING AHEAD
The Hawkeyes return to action Saturday, Jan. 24, hosting Northwestern in a Big Ten matchup at the Campus Re­­creation and Welless Center Natatorium in Iowa City, Iowa.

SCOUTING THE FIELD
The Fighting Illini (3-3) graduated six athletes from 2013-14, while returning 21 experienced swimmers and divers from last year’s squad. Led by Alison Meng, the Illini record holder in the 50 and 100 backstroke, the senior class is filled with seasoned swimmers that have stepped up for the Orange and Blue. The Illini added eight newcomers to the squad that have made an immediate impact.

WE MEET AGAIN
The Hawkeyes went head-to-head with the Fighting Illini last season in Iowa City on Jan. 18. Iowa posted a 198-101 triumph over the visitors in the Campus Recreation and Wellness Center Natatorium.

ALL-TIME SERIES
Saturday’s competition marks the 27th meeting between Iowa and Illinois. Dating back to the teams first meeting in 1976, the series remains even at 13-13.

FREEMAN TAKES 2ND AT WINTER NATIONALS
University of Iowa volunteer assistant Deidre Freeman dove to a silver medal on Dec. 20, at the 2014 USA Diving Winter National Championships held at the McCorkle Aquatic Center in Columbus, Ohio. Freeman dove alongside Indiana standout Jessica Parratto in the women’s 3-meter synchro event. The two dove to a score of 563.40, finishing behind Abby Johnson and Laura Ryan (597.30).

SOUGSTAD NAMED SWIMMER OF THE WEEK
University of Iowa sophomore Emma Sougstad was named the Big Ten Swimmer of the Week on Nov. 16. Sougstad earned the accolade after posting a pair of record-setting times in the dual against Iowa State on Dec. 12.