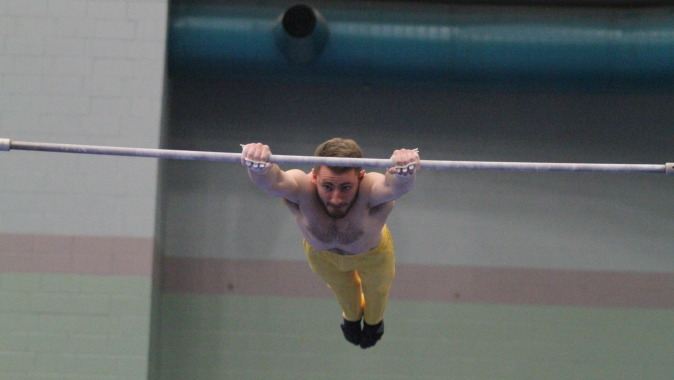 THIS WEEK:
The No. 9 University of Iowa men’s gymnastics team welcomes UIC to Iowa City on Saturday, Jan. 24 at Carver-Hawkeye Arena for its first of three home meets this season. The event starts at 7 p.m. (CT).

FOLLOW ALONG:
Fans can follow the meet online through meetscoresonline.com. Select the meet and click PDF for individual score results. A live stream of the meet is available on the Iowa men’s gymnastics schedule page at hawkeyesports.com.

PROMOTIONS:
Iowa men’s gymanstics team welcomes the Boy Scouts of America to Saturday’s meet. All boy scouts can attend the competition for free. The first 200 fans will receive a free men’s gymnastics T-shirt. Following the meet, the team will be available to sign autographs at the south concourse.

LAST TIME OUT:
The Iowa men’s gymnastics team traveled to Chicago, Illinois, to compete in the Windy City Invitational. The Hawkeyes finished fourth out of six teams with a combined score of 414.000. Cory Paterson continued to excel on high bar, posting a career high 15.100. Doug Sullivan won the pommel horse event, scoring a 14.900. Head coach JD Reive thought the event was a good starting point for 2015.

GYMNASTS TO WATCH:
Redshirt senior Lance Alberhasky and junior Matt Loochtan were named to the 2015 Big Ten Gymnasts to Watch List on Dec. 11. Alberhasky set new career high scores in four events in 2014 and is team captain this season. Loochtan recorded career bests in three events including setting a new school record on floor with a 15.650.

NATIONALLY RANKED:
The Hawkeyes are ranked in the top 10 nationally according to the most recent release of the College Gymnastics Association (CGA) Coaches’ Poll (Jan.19). Oklahoma earned the top spot followed by Stanford, Illinois, Penn State and Michigan. California and Ohio State are tied for sixth, Air Force is eighth, and Iowa and Nebraska round out the top ten.

HAWKEYE FACILITY RENOVATION:
The men’s and women’s gymnastics teams are amidst a practice facility renovation. The renovation will provide the gymnasts with more space to practice, and include two new foam pits and another pommel horse. The project will help accelerate the gymnasts’ skills and improve safety at the facility. The facility — located in the UI Field House — is scheduled to be completed in February 2015.

UP NEXT:
The Hawkeyes remain in Iowa City to host No. 1 Oklahoma and Big Ten rival Minnesota at Carver-Hawkeye Arena on Sunday, February 1. The meet begins at 12:00 p.m.