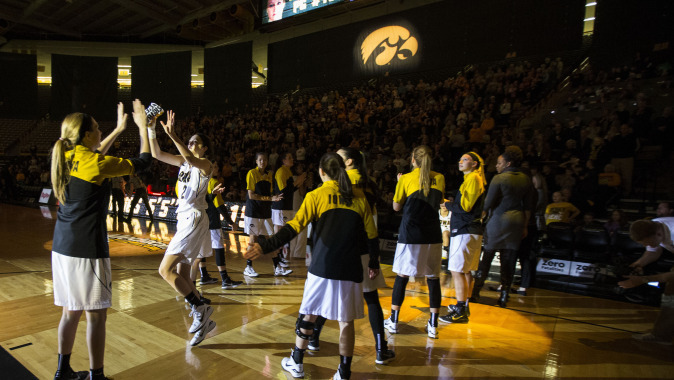 WATCH LIVE ON BTN:
Thursday’s contest will be broadcast live on BTN. Lisa Byington and Brenda VanLengen will call the action.

QUICK HITS:
? Iowa is ranked No. 20 in the Associated Press Top-25 poll and No. 18 in the USA Today Coaches poll.
? Iowa’s NCAA RPI is 13.
? The Hawkeyes have won 8-of-9 games overall since Dec. 7.
? Iowa is 10-0 at home this season, and 24-4 at home since the start of last season.
? Iowa enters Thursday’s action tied with Minnesota for second in the conference at 5-1 in league play. Maryland is in first with a 6-0 mark. Iowa’s next two opponents, Michigan and Nebraska, are both 4-2.
? The Hawkeyes last started 5-1 in Big Ten play during the 1997-98 season.
? The Hawkeyes are 14-1 this season when three or more players score in double figures.
? Iowa ranks 10th nationally in 3-point field goal percentage (38.5%), while Michigan is fifth nationally (39.3%).
? Melissa Dixon leads the nation in 3-pointers/game (3.94), while the Hawkeyes lead the Big Ten in 3-pointers per game (8.0).
? Iowa set the school record for scoring offense (78.2) last season, leading the league in scoring while notching the second-most points in a season in Big Ten history (2,814). The Hawkeyes rank 16th nationally this season (78.2).
? Ally Disterhoft has scored in double figures in 31 of her 34 career starts. Iowa is 27-7 when Disterhoft starts.

SERIES HISTORY:
? Iowa leads the all-time series, 45-15.
? Thursday marks the only regular season meeting between the two schools.
? The Hawkeyes won at Michigan last season in the only meeting, 74-70.
? Iowa is 7-3 against the Wolverines in the last 10 meetings in Iowa City.

LOGIC NAMED TO WOODEN AWARD MIDSEASON TOP 20:
Iowa senior Samantha Logic has been named to the John R. Wooden Award Women’s Midseason Top 20 list, comprised of the front-runners for college basketball’s most prestigious individual honor. The list is chosen by a poll of national women’s college basketball media members. Logic is the only player from the Big Ten on the midseason list.

THE NATION’S LEADING 3-POINT SHOOTER:
? Iowa senior Melissa Dixon leads the nation in 3-point shooting, averaging 3.94 3-pointers per game, nearly one more 3-pointer than any other player. Kelsey Mitchell of Ohio State is second (3.74).
? Dixon made six 3-pointers (6-of-10) in the win at Rutgers on Jan. 4, surpassing Lindsey Meder (261) for the most in Iowa history.
? Dixon ranks fifth in Big Ten history with 277 career 3-pointers.
? She scored 31 points in Iowa’s win at Drake on Dec. 21, making 10 3-pointers (10-of-14), setting a new school record. The previous school record was seven, accomplished five times in program history, twice by Dixon; the NCAA and Big Ten record for 3-pointers in a single game is 12.