No. 19 Hawkeyes to Face Wildcats in B1G Dual 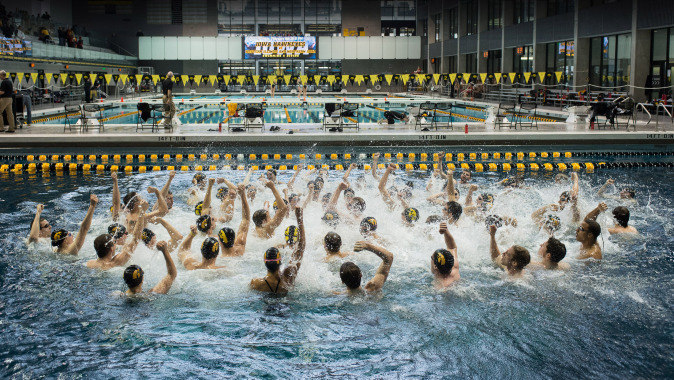 This Week
The No. 19 University of Iowa men’s swimming and diving team hosts Northwestern on Saturday in a Big Ten dual at the Campus Recreation and Wellness Center Natatorium beginning at 11 a.m. (CT).

Live Results
Fans can follow this week’s action via live results at: livestats.hawkeyesports.com, and on the “Meet Mobile” swim meet application on cell phones and tablets. Download the application at this link: http://www.active.com/mobile/meet-mobile-app.

Looking Ahead
The Hawkeyes return to action Jan. 30-31, in South Bend, Indiana, competing in the Shamock Invite.

Scouting the Wildcats
Northwestern enters Saturday’s competition with a 6-3 mark in head-to-head competition. The Wildcats are led by junior Jordan Wilimovsky, who finished fourth in the nation a year ago in the 1,650 freestyle and is among the favorites contending for the national title this year.

CSCAA Top-25 Rankings
Iowa ranks 19th in the most recent College Swimming Coaches Association of America (CSCAA) Division I team ranking, announced Jan. 22, by the CSCAA. The Hawkeyes earn the ranking following a win at the Hawkeye Invitational and a 2-2 start in dual meets. Iowa holds wins over Michigan State and South Dakota State while falling only to No. 5 Michigan and No. 23 Minnesota.

We Meet Again
The Hawkeyes went head-to-head with the Wildcats last season in Evanston, Illinois, on Jan. 18. Northwestern came out on top, edging the Hawkeyes in a close finish 151-149.

All-Time Series
Saturday’s competition marks the 70th meeting between Iowa and Northwestern. Dating back to the teams first meeting in 1920, the Hawkeyes own the all-time series at 41-27-1.

Boschult Makes Nationals Debut
UI junior Addison Boschult made his nationals debut on Dec. 18, competing on the platform at the 2014 USA Winter Diving Nationals. The Omaha, Nebraska, native finished 11th after posting a score of 1,050.45 in the finals.

Betulius Qualifies for Nationals
UI senior Grant Betulius posted an NCAA `A’ cut time of 45.56 in the 100 backstroke to lead off the 400-medley relay on Dec. 5, at the Hawkeye Invite. Betulius, a native of Naperville, Illinois, smashed the previous record, held by Dustin Rhoads (46.33) and topped the pool record of 46.30 that has held since the 2012 Big Ten Championships.

Twarowski: B1G Newcomer of the Week
UI freshman Jerzy Twarowski was named the Big Ten Freshman of the Week on Nov. 4. Twarowski earned the accolade after a breakout meet in the dual against Minnesota on Oct. 31. The Krakow, Poland, native claimed three top finishes and swam to season-best times in the 200-yard medley relay (1:29.46), 100 fly (48.65), and 200-fly, where he touched in with an NCAA `B’ cut time of 1:47.55.

Betulius Back for Senior Season
Senior Grant Betulius returns as the most accomplished swimmer on the Hawkeye roster after garnering honorable mention All-America honor in three events in 2013 – 100 back and 200 and 400-medley relays. The Naperville, Illinois, native is the Iowa school record holder in four events — 100 back (46.33), 200-medley relay (1:25.82), 400-medley relay (3:09.66), and 800-free relay (6:26.79) — heading into his senior season. Betulius posted NCAA “B” qualifying times in both the 100 and 200 backstroke last season. Betulius swam to the Hawkeyes lone win in the 100 backstroke against Michigan on Oct. 4. The Naperville, Illinois, native recorded a time of 49.27.

Off the High Dive
The Iowa diving team has experience and youth on its roster in 2014-15. The Hawkeyes return junior Addison Boschult and sophomore Brandis Heffner, while welcoming two incoming freshmen — Evan Hull and Matt Mauser. Boschult led the Hawkeyes in 3-meter (343.20) and platform (381.50) last season. He qualified for NCAA Zone Diving in both events and finished fifth at the NCAA Zone D Diving Championships with a school-record score of 381.50 points on the platform. Boschult capped the 2013-14 season by garnering the “Lobby” Lobdell Award as the men’s diving MVP.

Freeman Joins Staff
Former Hawkeye All-American Deidre Freeman joins the Iowa coaching staff as a volunteer assistant coach. Freeman, who coached from 2011-14 at Grinnell High School and Grinnell College, will work with diving coach Todd Waikel and the divers. Freeman is an accomplished diver in her own regard, as she was 1-of-14 women named to the 2014 AT&T Olympic Performance Squad. The group includes divers who most exhibit the skill and determination to become 2016 Olympic Team members. Freeman is still the Iowa record holder on both the 1 and 3-meter springboard events.