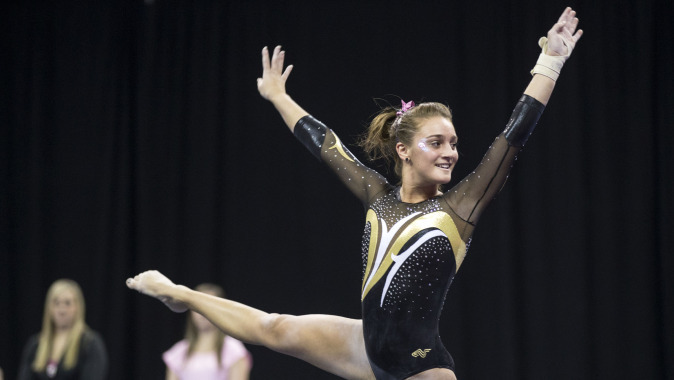 “I am very pleased,” said head coach Larissa Libby. “The team that came out there tonight was on fire. Completely different look, a different demeanor, a different intensity, and that is what we have been trying to get out of them for a while.”

Iowa posted a 48.825 on the floor and Ohio State tallied a 49.050 on the beam. The Buckeyes then clinched the come from behind victory in the final rotation, registering a team score of 49.150 on the floor while Iowa tallied 48.125 on the beam.

“I am disappointed that we blew the lead, but I am so pleased with all of the other things that were taken care of,” said Libby. “It was special tonight. The team I saw out there is definitely a force to be reckoned with.”

The GymHawks return home to host Maryland on Friday, Jan. 30. The meet is scheduled to begin at 7 p.m. (CT) inside Carver Hawkeye Arena. The event will serve as Iowa’s `Recycle Like a Hawk’ meet, and the first 100 fans will receive free tote bags.