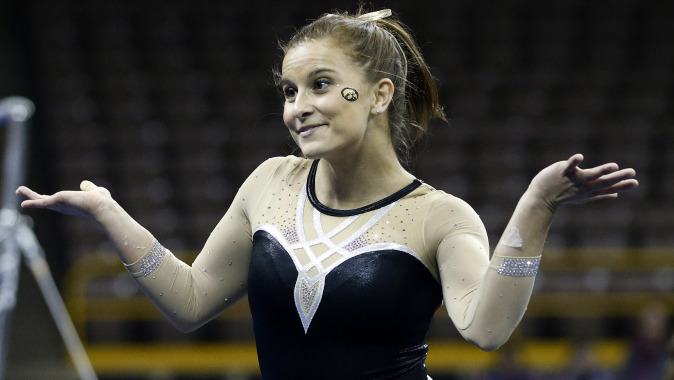 THIS WEEK:
The University of Iowa women’s gymnastics team hosts Maryland on Friday at 7 p.m. (CT) inside Carver-Hawkeye Arena.

PROMOTIONS:
Friday will serve as Iowa’s first `Recycle Like a Hawk’ meet and the first 100 fans will receive free tote bags.

SCOUTING THE COMPETITION:
Maryland fell to No. 13 Penn State, 196.550-194.450, on Jan. 24 inside Rec Hall in its first road meet of the year. Last season, the Terps ended with a sixth-place finish at the NCAA University Park Regional competition. Maryland is currently ranked 18th nationally as a team on the vault (48.975 average score) and 12th nationally on floor (48.933).

HEAD COACH Larissa Libby:
Larissa Libby enters her 11th year as head coach, and 15th year overall, at the University of Iowa in 2014-15. In 2014, six Hawkeyes were selected for NCAA Regional competition. Alie Glover, Angel Metcalf, and Sydney Hoerr were selected as all-around competitors, while Jordyn Doherty competed on vault and Mollie Drenth competed on floor. Maryah Huntley was selected as the alternate behind Drenth on floor. Libby coached Hoerr to second team All-Big Ten honors, while Hoerr, Caitlin Tanzer and Glover earned Academic All-Big Ten honors. Libby led Iowa to its sixth-consecutive NCAA postseason appearance and the seventh in her tenure in 2013.

UP NEXT:
Iowa will travel to Lincoln, Nebraska on Saturday, Feb. 7 for a conference meet against Nebraska. The meet is scheduled to begin at 6 p.m. (CT) inside the Devaney Center.