No. 19 Hawkeyes Set for Shamrock Invite 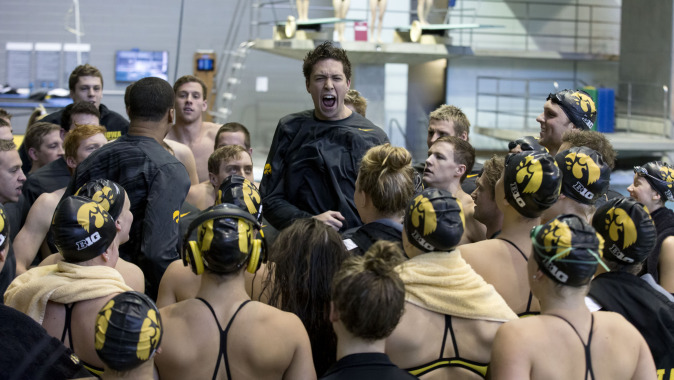 This Week
The No. 19 University of Iowa men’s swimming and diving team travels to South Bend, Indiana, taking part in the two-day Shamrock Invitational on Friday and Saturday at the Rolfs Aquatic Center.

Live Results
Fans can follow this week’s action http://www.und.com/livestats/m-swim/013015/index.htm, and on the “Meet Mobile” swim meet application on cell phones and tablets. Download the application at this link: http://www.active.com/mobile/meet-mobile-app.

Looking Ahead
The Hawkeyes return to action Feb. 6, hosting Western Illinois and South Dakota at 6 p.m. (CT) in the Campus Recreation and Wellness Center Natatorium in Iowa City.

Scouting the Field
The Hawkeyes join a four-team field this weekend, competing alongside Notre Dame, Missouri State, and Incarnate Word.

CSCAA Top-25 Rankings
Iowa ranks 19th in the most recent College Swimming Coaches Association of America (CSCAA) Division I team ranking, announced Jan. 22, by the CSCAA. Iowa is one of six Big Ten schools in the Top-25: No. 6 Michigan, No. 9 Indiana, No. 12 Ohio State, No. 17 Wisconsin, and No. 23 Minnesota. Penn State also received votes.

Quick-Cap vs. Northwestern
Iowa won its third-straight outing on Jan. 24, posting a 171-129 Big Ten win over Northwestern at the Campus Recreation and Wellness Center Natatorium in Iowa City, Iowa.

Boschult Makes Nationals Debut
UI junior Addison Boschult made his nationals debut on Dec. 18, competing on the platform at the 2014 USA Winter Diving Nationals. The Omaha, Nebraska, native finished 11th after posting a score of 1,050.45 in the finals.

Betulius Qualifies for Nationals
UI senior Grant Betulius posted an NCAA `A’ cut time of 45.56 in the 100 backstroke to lead off the 400-medley relay on Dec. 5, at the Hawkeye Invite. Betulius, a native of Naperville, Illinois, smashed the previous record, held by Dustin Rhoads (46.33) and topped the pool record of 46.30 that has held since the 2012 Big Ten Championships.

Twarowski: B1G Newcomer of the Week
UI freshman Jerzy Twarowski was named the Big Ten Freshman of the Week on Nov. 4. Twarowski earned the accolade after a breakout meet in the dual against Minnesota on Oct. 31. The Krakow, Poland, native claimed three top finishes and swam to season-best times in the 200-yard medley relay (1:29.46), 100 fly (48.65), and 200-fly, where he touched in with an NCAA `B’ cut time of 1:47.55.

Betulius Back for Senior Season
Senior Grant Betulius returns as the most accomplished swimmer on the Hawkeye roster after garnering honorable mention All-America honor in three events in 2013 – 100 back and 200 and 400-medley relays. The Naperville, Illinois, native is the Iowa school record holder in four events — 100 back (46.33), 200-medley relay (1:25.82), 400-medley relay (3:09.66), and 800-free relay (6:26.79) — heading into his senior season. Betulius posted NCAA “B” qualifying times in both the 100 and 200 backstroke last season. Betulius swam to the Hawkeyes lone win in the 100 backstroke against Michigan on Oct. 4. The Naperville, Illinois, native recorded a time of 49.27.

Off the High Dive
The Iowa diving team has experience and youth on its roster in 2014-15. The Hawkeyes return junior Addison Boschult and sophomore Brandis Heffner, while welcoming two incoming freshmen — Evan Hull and Matt Mauser. Boschult led the Hawkeyes in 3-meter (343.20) and platform (381.50) last season. He qualified for NCAA Zone Diving in both events and finished fifth at the NCAA Zone D Diving Championships with a school-record score of 381.50 points on the platform. Boschult capped the 2013-14 season by garnering the “Lobby” Lobdell Award as the men’s diving MVP.