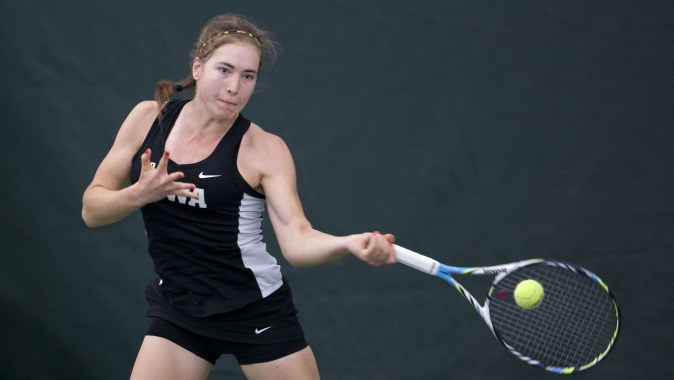 THIS WEEK FOR THE HAWKEYES
The University of Iowa women’s tennis team continues its dual schedule at the Hawkeye Tennis and Recreation Complex hosting Iowa State and Utah State this weekend. The Hawkeyes will take on the Cyclones in the annual Iowa Corn Cy-Hawk Series on Friday, Feb. 6 at 6 p.m. (CT).

HAWKEYES GEAR UP FOR ANNUAL CY-HAWK SERIES
Iowa currently trails in the annual Iowa Corn Cy-Hawk series 13-6. Iowa has captured points in wrestling, women’s basketball and women’s swimming and diving. The Cyclones have gathered points in soccer, football, volleyball, men’s and women’s cross country, and men’s basketball. Iowa and Iowa State are currently tied 5-5 all-time in the Cy-Hawk series and with a women’s tennis victory on Friday, Iowa can begin to close the gap with the addition of two points towards this year’s race.

DOUGHERTY IN THE CY-HAWK SERIES
Head coach Katie Dougherty holds a 3-0 record against Iowa State in her six-year tenure. The Iowa women’s tennis program owns a 34-0 all-time record against the Cyclones. Friday is the first meeting between the schools since the 2012-13 season.

IOWA TAKES ON THE AGGIES
This will be the first dual meeting between Iowa and Utah State. The Aggies currently hold a 4-0 record for the 2014-15 season and this will be their second road trip of their dual schedule.

THE BEGINNING OF THE END
The Hawkeye roster features four seniors who were tabbed the No. 18 recruiting class in the country four years ago. Shelby Talcott, Katie Zordani, and Morven McCulloch have a combined 172 wins entering their final season, while Ellen Silver is showing signs of stability after battling injury since her freshman year. Silver came to campus as the 64th best prospect in the nation and hopes this bill of health will help make up for lost time. All four seniors found success during their first dual of the 2015 season, with a 4-0 singles record and a 3-1 doubles record as a class.

HAWKEYES SWEEP NORTHERN IOWA, 7-0
The University of Iowa women’s tennis team opened its dual season with a 7-0 sweep against the Northern Iowa Panthers at home on Jan. 31. This was the second year in a row the Hawkeyes swept UNI 7-0 in their home opener, increasing the all-time record against the Panthers to 9-0 in Iowa’s favor.

COMING UP FOR THE HAWKEYES
Iowa women’s tennis returns to action Feb. 14 taking on the Montana Grizzlies in Eugene, Oregon. The dual is set to begin at 12 p.m. (CT). The Hawkeyes then compete against the Oregon Ducks on Feb. 15 at 12 p.m. (CT) to round out the road trip.