Friday Night Battle with the Sexes 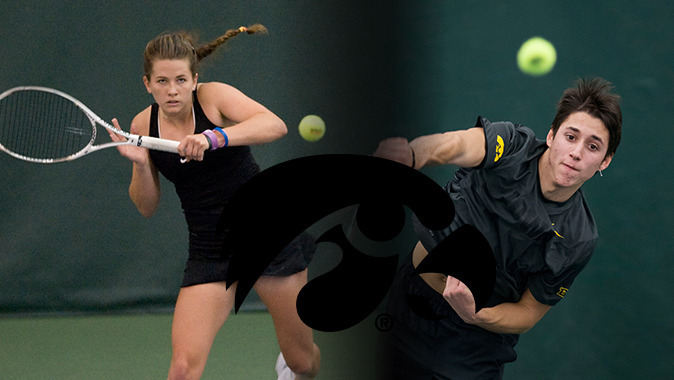 IOWA CITY, Iowa — It will be a battle with the sexes Friday night at the Hawkeye Tennis and Recreation Complex.

For the first time in school history, the men’s and women’s tennis programs will host matches at the same time on their home court. The women play Iowa State in the Iowa Corn Cy-Hawk Series, while the men simultaneously host Marquette. Competition begins at 6 p.m. (CT).

“This is just something (men’s head coach) Ross (Wilson) and I came up with to get this place rocking,” said women’s head coach Katie Dougherty. “Our Iowa State crowd is generally one of our biggest, and we wanted to combine crowds to create a really fun event and electric atmosphere.”

The HTRC, home to eight individual courts, is divided down the middle by a spectators’ deck. The men will play on one side of the deck, while the women play on the other. Admission is free and University of Iowa students will receive free pizza while supplies last.

“I think it will be a great environment for both the players and fans to get to see our men’s and women’s team play at the same time,” said Wilson. “I know our guys are looking forward to cheering on the girl’s and competing with them Friday night.”

Though this is the first time the teams have shared the court in NCAA competition, there will be no need for introductions.

“We’re pretty close with the men’s team so it should be a lot of fun,” said senior Shelby Talcott. “Every time they’re home they come to our matches, and every time we’re home we go to their matches. It should be exciting.”

The combined dual isn’t unique to Iowa, other schools have executed similar promotions with success, but it is the inaugural event on campus, so some have taken a grassroots effort to pack the house.

“The men’s and women’s team are both very excited,” said freshman Anastasia Reimchen. “We’ve talked about it and invited a lot of friends over. It is going to be a huge day.”

The Hawkeye men are searching for their fourth win in five tries, while the Iowa women enter the weekend 1-0. After Friday’s match, the women have an off-day before hosting Utah State on Sunday at 11 a.m.

“It’s going to be a fun weekend,” added Dougherty. “Let’s get a ton of people in here and make it fun for the student-athletes and the fans.”