No. 16 Iowa Travels to Madison 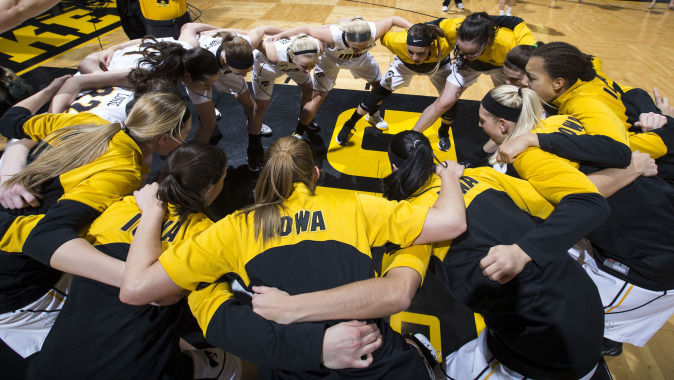 QUICK HITS:
? Iowa is ranked No. 16 in the Associated Press Top-25 poll and No. 17 in the USA Today Coaches poll.
? Iowa’s NCAA RPI (Feb. 7) is No. 5. Iowa is 10-3 against teams in the top 55 of the RPI.
? Iowa is in second place in the Big Ten at 9-2, one game ahead of Rutgers (8-3).
? The Hawkeyes are off to their best start in league play and overall since the 1995-96 season.
? Iowa senior Samantha Logic, the NCAA’s active career assists leader (787), ranks fifth in assists in Big Ten history. Helen Darling of Penn State is fourth (791). In NCAA history, 27 players have recorded 800 or more assists.
? Logic, a native of Racine, Wisconsin, has recorded three double-doubles in three games in Madison. She is six assists shy of recording three triple-doubles, averaging 16 points, 11.3 rebounds, and 8.0 assists.
? Iowa freshman Carly Mohns hails from Brodhead, Wisconsin.
? Wisconsin’s Nicole Bauman is ninth nationally in 3-point percentage (45.7%), and Iowa’s Melissa Dixon is fourth (47.8%). Dixon leads the nation in 3-point field goals per game (3.91) and total (86).
? Iowa set the school record for scoring offense (78.2) last season, leading the league in scoring while notching the second-most points in a season in Big Ten history (2,814). The Hawkeyes rank ninth nationally this season (79.4).
? Ally Disterhoft has scored in double figures in 36 of her 39 career starts. Iowa is 31-8 when Disterhoft starts.
? Iowa is the only Big Ten team, and one of only 14 teams in the country, to appear in the last seven NCAA Tournaments. There are 349 Division I teams.
? Iowa is 45-13 overall since the start of last season.

WATCH THE ACTION:
Sunday’s contest can be seen for a fee on BTN Plus.