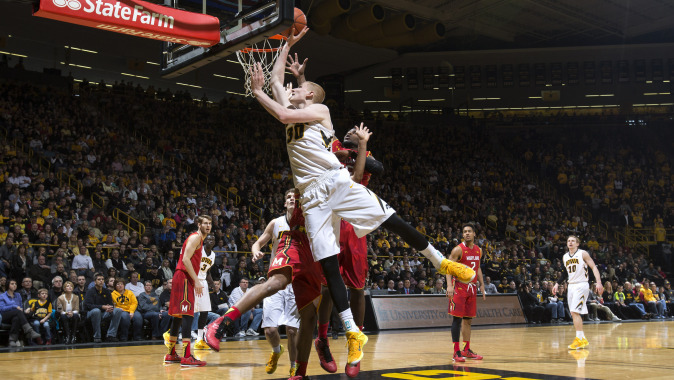 Fran McCaffery: I don’t normally open, as you guys know, but I wanted to say something today. Obviously this is a big win for us, big win for our program, but this is not the most important thing that happened on this campus this weekend. We had a group of students who over the last year as part of our dance marathon group raised over $2 million. That’s pretty incredible, you know, especially for me and what we’ve been through and know what that means, I’m very proud to be a part of that, be a part of an institution where the student body would do that. And I just wanted to say that right now. Now we can move on to questions.

Q. For the second straight game you guys shoot over 60 percent. What’s gotten into you guys? What is it about the offense?
Fran McCaffery: I think our ball movement has been better. You know, we’ve been really unselfish. I think we’ve gotten some transition opportunities, which is critical for us. You can do that more when you get more stops, which we got more stops today, and I think we’re sharing the ball. Various people are scoring; they’re comfortable scoring the ball. They’re taking, I think, intelligent shots, and that’s what you want.

Q. The first 10 minutes, it was terrific defense, too.
Fran McCaffery: It’s great defense in the first 10 minutes. They shot 24 percent in the first half. This is a terrific team. It’s not normally going to do that. But you know, we got into them, we mixed our defenses a little bit. They never really got comfortable. They didn’t get comfortable shooting the three until the second half. They’re a much better three point shooting team, as we saw in the second half, than they were in the first.

Q. The second game in a row Peter Jok has gotten you off to a good start offensively but he also had two early assists. Does it almost feel like he’s a freshman? Last year he wasn’t maybe totally healthy and trying to work his way in.
Fran McCaffery: I wouldn’t say that. I would say this: I think he gained valuable experience last year. You know, he at times didn’t get to play. He got to play sometimes. As the season wore on, I think you saw him get more and more comfortable. He wasn’t ready to defend at this level and be a consistent player last year. He wasn’t ready to take care of the ball to the level you have to be ready at this level, and he figured that out as last year went on. He worked on those things in the summertime, and you’re seeing a different guy now, and it’s made a huge difference on our team.

Q. He’s shooting probably with more confidence than he ever has, isn’t he?
Fran McCaffery: You know, he’s making more shots. I would tell you that he shot it with confidence last year. I don’t think he’s ever lacked for confidence shooting the ball. He’s always been a really good shooter and he’s always trusted his jump shot. I would say that.

Q. Mike had a career high nine assists. Seems like he’s really been a different type of player.
Fran McCaffery: Well, he’s attacking the basket, whether it be for himself or for someone else, and I think that’s critical for any offense. If you have a guy who can break the defense down and create shot opportunities for other people, and that’s what he’s doing.

Q. Has he had to become a different player with the elbow injury?
Fran McCaffery: Well, he’s not shooting as many threes because he can’t, but as long as he can make a jumper, a pull up jumper or a 17 foot jumper, he’s equally effective.

Q. Talk about the aggressiveness you want Adam Woodbury to play with.
Fran McCaffery: At both ends. I thought he was great today. You know, I thought on the glass, defensively, offensively. He was really good against the press. Some other guys got a little tentative, and he didn’t.

Q. What happens to teams, you see some teams that kind of flatten out at the end of January, maybe even go backwards. Your team seems to be going in the opposite direction.
Fran McCaffery: Well, I don’t think you ever want to especially in this league, I don’t think you ever want to look at a loss or even three losses in a row like we had any differently than you look at three wins. We played great against Michigan the other night. We played great today. We played awful at Wisconsin, played okay at Purdue, played great at the end, didn’t play well so I don’t think you want to look at it like that. You really don’t. I don’t think you want to say we’re peaking. I don’t ever look at peaking. I look at, okay, how do we play today, and how can we be better tomorrow and how can we get ready for Thursday? That’s all we’re trying to do. Now, if we end up you look back and say, boy, they peaked at the right time, that’s great. But I don’t look at it I don’t think we can look at it that way to be honest with you.

Q. You’ve obviously seen what happened to Maryland recently on the road. As a coach do you take advantage of vulnerability like that just in terms of attacking them and really trying to sort of get them out of things quickly, or is that just normal?
Fran McCaffery: They’ve had a unique experience on the road. I mean, Indiana hits 15 threes, Ohio State, two guys had nine, and I think they hit 12 or 13. So I didn’t look at them as, boy, they have a problem on the road, they lost three games on the road in our league. I look at it like this: They lost to three good teams. They happened to be on the road. It’s hard to win on the road. It’s hard to beat Ohio State at Ohio State. It’s hard to win at Indiana, and they lost there. It’s hard to win here. I didn’t come in here thinking that they wouldn’t play well because they didn’t play well in a couple road games. I watched their body of work. I thought the way they played against Iowa State early in the year, I haven’t seen too many teams play that well. Iowa State is a terrific team and they played great and they beat them, and I’ve watched them, and I’ve watched obviously you’re going to focus on three guys, but they have a lot of X factor guys after that. They do. I mean, you could get hurt by Nickens, you could get hurt by Pack, Smotrycz can beat you, Rand has 15 the other night, and the two big kids, Dodd and Cekovsky. There’s a lot of ways that they can go to hurt you. I didn’t expect one field goal by their team other than Trimble in the first half. I didn’t expect that. Our defense was good, but they missed a couple early, and then they couldn’t make a three, and then we got going offensively, and it snowballed on them a little bit. You knew they were going to come back, you knew they were going to press and scramble a little bit. You knew Wells was going to come back. He’s too good. Just another day in the Big Ten.

Q. What was the trigger? Was it just a matter of confidence, playing together and having some success?
Fran McCaffery: Yeah, a little bit of all that. I mean, obviously if you’re a shooting guard, you want to see the ball go in, but I think it’s a function of, okay, how are they guarding me, how can I get open, how can I be in a position to make shots. I’m not going to just jack. And same for Uthoff. He hit a stretch where he didn’t play as well offensively, and he got back on track against Michigan, and that was good to see.

Q. What did you hear from the officials regarding Adam touching the eye or whatever it was?
Fran McCaffery: They said he poked him in the eye.

Q. Is it a flagrant now if you poke a guy in the eye? I’m just curious. I thought maybe that explained that.
Fran McCaffery: You know, don’t misconstrue it. That’s an excellent crew. But on that one, I don’t know.

Q. That’s three times he’s got somebody in the eye. How does this keep happening?
Fran McCaffery: Next question. Ask an intelligent question.

Q. Why is that not an intelligent question?
Fran McCaffery: Because I said so.