No. 13 Hawkeyes Set for Challenge at No. 20 Nebraska 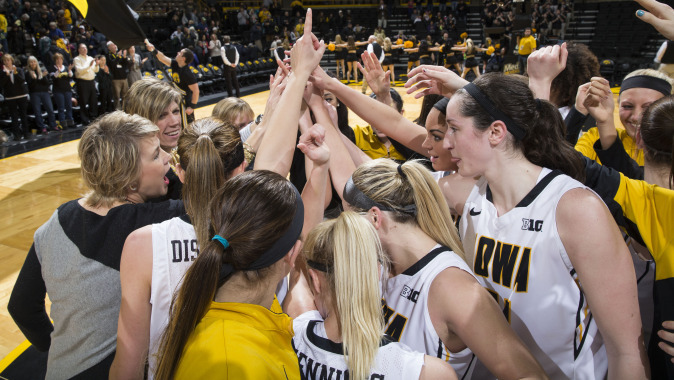 WATCH THE ACTION:
Thursday’s matchup will be shown live on the Big Ten Network. Kevin Kugler and Stephanie White will call the action from Lincoln, Nebraska.

SERIES HISTORY/NOTES:
? The Hawkeyes are 8-10 all-time against Nebraska. In games played at Nebraska, Iowa is 3-4 all-time.
? Iowa’s last win in Lincoln over the Huskers occurred on March 21, 2005. The Hawkeyes defeated the Huskers, 71-67, in the WNIT Second Round to advance to the WNIT Quarterfinals.
? The Hawkeyes ended an eight-game losing streak against Nebraska when they defeated the Huskers, 78-72, in overtime on Jan. 26 inside Carver-Hawkeye Arena.
? Samantha Logic (22), Ally Disterhoft (20), and Bethany Doolittle (12) scored in double figures in the victory.
? Disterhoft logged a double-double with 13 boards (all defensive) and 20 points. It was her second of the season and the fifth of her career.
? Iowa is third in the Big Ten in scoring offense (79.7), while Nebraska is 11th (67.2).

DOOLITTLE NAMED TO BIG TEN PLAYER OF THE WEEK HONOR ROLL:
? Bethany Doolittle was named to the Big Ten Player of the Week Honor Roll on Feb. 9 for her efforts in wins against Ohio State and at Wisconsin.
? She posted her sixth double-double of the season with 19 points and 13 rebounds, and compiled five blocks against Ohio State.
? The Oakdale, Minnesota, native scored 18 points, blocked three shots, and posted a career high five steals at Wisconsin.
? Doolittle has scored in double figures 17 times this season, including the last six games.

MOVING UP CAREER CHARTS:
? Samantha Logic (791 career assists) surpassed Cara Consuegra (1997-2001; 576) as Iowa’s all-time assists leader during Iowa’s win at Illinois on March 2, 2014, during the 2013-14 regular season finale. She is tied for fourth in Big Ten history with Helen Darling of Penn State. Tina Nicholson of Penn State is third (826).
? Melissa Dixon is Iowa’s career record holder for 3-pointers (296). She is third in Big Ten history. Kelly Mazzante of Penn State is second (357), while Maggie Lucas of Penn State is the Big Ten record holder (365).
? Bethany Doolittle is second all-time in program history with 241 career blocks. Morgan Johnson is first with 293.

HAWKEYES IN BIG TEN PLAY:
Iowa head coach Lisa Bluder is a three-time Big Ten Coach of the Year (2001, 2008 and 2010). She has guided Iowa to 10 upperdivision finishes in the Big Ten in 14 seasons. Iowa won a share of the Big Ten regular season championship in 2008 and finished in a three-way tie for second in 2009. The Hawkeyes clinched a share of the title in 2008 with a win at Wisconsin in the regular season finale (March 2, 2008). Since the 2008 season, Iowa has finished first once, second twice, third twice, fourth once, and seventh once.

LOGIC NAMED TO DAWN STALEY AWARD WATCH LIST:
Senior Samantha Logic is one of 16 student-athletes to be named to the Midseason Watch List for the Dawn Staley Award. The Dawn Staley Award is given to the most outstanding collegiate guard in the country; a player who exemplifies the skills that Dawn possessed during her career (ball handling, scoring, her ability to distribute the basketball, and her will to win).

NCAA STREAK BEST IN BIG TEN:
Iowa is the only Big Ten team, and one of only 14 teams in the country, to appear in the last seven NCAA Tournaments. There are 349 Division I teams. Iowa is 1-of-21 teams to advance to the Second Round of the NCAA Tournament in each of the last two seasons. The Hawkeyes, a No. 6 seed in the 2014 NCAA Tournament, defeated 11th-seeded Marist in the First Round, 87-65, marking the fourth-largest margin of victory in an NCAA Tournament game in program history.