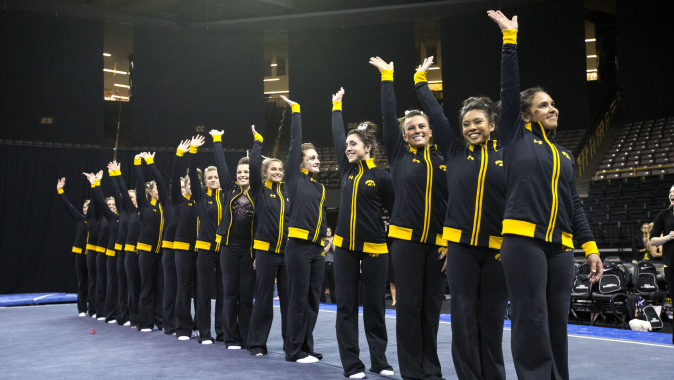 THIS WEEK:
The University of Iowa women’s gymnastics team returns home to host Illinois on Saturday at 3 p.m. (CT) inside Carver-Hawkeye Arena. The Hawkeyes will be celebrating Valentine’s Day at the dual and the event will serve as Iowa’s annual `Think Pink: Breast Cancer Awareness’ meet.

LAST TIME OUT:
The GymHawks fell to Nebraska on Feb. 7, 197.325-195.175 inside the Devaney Center. Iowa started the meet on bars posting a 48.925. Senior Johanny Sotillo paced the GymHawks, posting a score of 9.850 and placing second in the event. The GymHawks finished the night strong on beam, tallying a 49.100, replacing their previous season best on beam against Maryland (49.025). Hoerr, and Metcalf both competed for the all-around title for Iowa, posting scores of 38.650 and 38.900 respectively. Metcalf finished third behind Nebraska’s Hollie Blanske (39.500) and Jessie Deziel (39.550).

PRACTICE FACILITY RENOVATION:
The women’s gymnastics team is amidst a practice facility renovation. The gym — located in the UI Field House — is scheduled to be completed in April 2015. The renova- tion will include new equipment, more space to train, and enhanced safety and resources for Hawkeye student-athletes.

UP NEXT:
Iowa will travel to Denver, Colorado on Saturday, Feb. 21, to take on the Denver Pioneers and BYU Cougars in a tri-meet. The meet is slated to begin at 7 p.m. (CT) inside Hamilton Gymnasium.