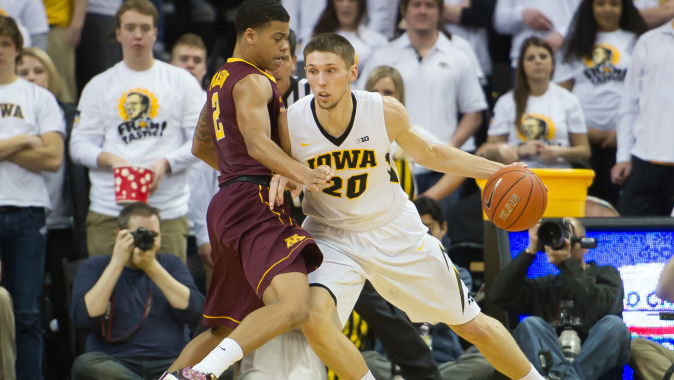 Q. On the last possession, you’re down three, at that point did you want him to go and score and get fouled?
COACH McCAFFERY: He made that decision. He’s got some options there. He’s got action on his left, he’s got action on his right, and he’s got space. We trust him to make a play. He got it essentially to the front of the rim. The kid, Walker, made a nice play. He poked it from him.

Q. Took you guys a little while to get going.
COACH McCAFFERY: Our offensive execution was not what it needed to be at the start of the game. It was not. I think you have to give their defense some credit for that. They were up in us pretty good. Our screening and our cutting and our movement wasn’t nearly as sharp as it needed to be. Gradually got better as the game went on. But it wasn’t good enough.

Q. (Question regarding the team having to learn how to handle success.)
COACH McCAFFERY: I don’t know. I guess it could be. I didn’t think of it that way. I’m respectful of every team we play. I think we played a good team tonight and they played better than us. I thought we would play better than we did. We didn’t. We hung in there at the end and almost stole it after really not playing very well. So hopefully we’ll learn and be better on Sunday.

Q. At this point you have three league wins at home and three on the road. Kind of a crazy stat.
COACH McCAFFERY: Yeah, it is. Again, that’s what this league is.

Q. Hollins was struggling last time you played him.
COACH McCAFFERY: He got two shots in the second half, one against one zone, one against other zone. That’s disappointing. When you think about, okay, our offense is not as efficient as it normally is, we can’t give up two threes to a guy who is averaging 21 in the last six, shooting 56%. That’s just inexcusable.

Q. Why the great difference in turnovers in this game?
COACH McCAFFERY: Well, I think it’s a couple things. You know, I think they’re particularly quick. They’re a steals team. They’re a chop team. Kind of how they play. I thought when we started the game, our offense wasn’t smooth, it wasn’t flowing. I think that had something to do with it. We were a little stagnant. We were telegraphing our post feeds. We were not making the kind of screens that get people open. We were not cutting to score. We were cutting to space. You got to be a little bit better than that, I think, against a team that plays defense like they do.

Q. When you look at how hard your team is playing at the end of the game, and there’s a nine minute stretch where you didn’t score a point, as a coach, do you scratch your head?
COACH McCAFFERY: We’ve all been there. I’ve been there before. Hopefully won’t be there again. The truth of the matter is you have those kinds of stretches sometimes in games. What do you do? You push different buttons. You change the defense. You change personnel. You call a timeout. You hug them. You yell at them. What else is there to do? We were trying to do everything to get them out of that mode they were in, which wasn’t going to be good enough. You could see it. It wasn’t going to be good enough tonight if we kept playing like that. We were trying to knock it off center a little bit and be more aggressive and attack the rim. I thought by virtue of getting into the bonus as early as we did in the second half, then getting into the double bonus, that would help. It helped a little bit, but not enough.

Q. They looked gun shy at times.
COACH McCAFFERY: I think the reason they looked gun shy at times is they were trying to figure out, okay, ball movement and execution with proper screening, people being open, versus I’m a good shooter. Even though it’s early in the clock, I’m open, I’m going to shoot the ball. That’s a hard thing sometimes to master. We didn’t master that tonight. I took Jarrod out one time. I said, You keep turning down shots. He said, Yeah, but I want to move it. That’s great, I want you to move it too. But I want you to shoot it. You’re different. Same thing with Pete. Pete turned down some shots. If other guys want to turn down some shots and move it on, that’s fine. That’s the complicated nature of the motion offense. Set plays you’re going to individuals in certain locations. But in the motion offense, it’s an equal opportunity offense. Anybody can shoot it. Anybody can drive it. Anybody can pass it. Anybody can post up. That’s all well and good, but the guys that are the better shooters have to recognize that and go get buckets when we’re struggling.

Q. Josh didn’t take a shot. He was open a few times. Is it more now of a confidence thing?
COACH McCAFFERY: You know what, I don’t know what to tell you on that. All I can tell you is I keep telling him to shoot the ball. I guess your summation of what you think you see is probably as close as anybody’s. I’m dying for him. I want him to shoot it. I want him to drive it. Just trust your talent and be a player. That’s all I ever tell him. He shoots it well in practice, plays well in practice. Gets in the game, he won’t shoot the ball. Now, in his defense, they still guard him closely. They run at him, close out hard on him. He’s also in the same mode that everybody else is: What if I get it four seconds into the shot clock, should I shoot that or wait, move it on, break the defense down? That’s what we worked on, that’s what we talked about. That’s not his fault, okay? But I can tell you I consistently told him I want him to shoot the ball. I pointed that out very directly after the game.

Q. When you’re coming off a disappointing loss, going on the road again, do you use the previous game to work ahead, or do you take a bigger picture like the last three or four games?
COACH McCAFFERY: People do it differently. I can tell you what I’m going to do. We’re going to look at what we did today that didn’t work, what did we like. It wasn’t all horrible. What did they do to us? What could we have done differently? You grade out everybody, the coaches and the players. You try to make some decisions, What do we do moving forward? What do we do to prepare for Northwestern? What kind of things do they do based on their personnel? You just kind of put it together that way. I won’t go eight back or certainly look any further ahead than our next opponent.

Q. Didn’t take any timeouts in the first half. Is that something you regret now?
COACH McCAFFERY: No. If we don’t use one, we burn it. Usually try to save that one for the end of the first half. Thought we were going to get a rebound, call a timeout, run something. In the second half, tonight is the best example I can give you, if you’re in that position, you need ’em all. When you call timeouts, we get our press set up, you can lengthen the game. It’s a philosophy of mine. A lot of coaches, they burn them. They don’t like what they see in two possessions, boom. I’ve coached against guys at 18:35, they call it. At halftime, they only have two left. That’s a philosophy they have. I’m not going to tell you they’re wrong and I’m right, but I’m going to tell you I’m going to save them.

Q. When you were down three at the end, did you consider using one then?
COACH McCAFFERY: No. Because I thought he might take a two. Then I would take a timeout, we could set up our press, change our press if we wanted to, make sure they knew we were going to foul. We would have fouled if we were still down one.

Q. Going for two, I know there are no easy answers in that spot, you’re talking about 10 or 11 seconds left.
COACH McCAFFERY: If you can get a quick two… Again coaches are different. If we can get a quick two, we’re going to take a quick two. 15 seconds when he blew it down. If we can be down one with 11 seconds, have a chance to press, foul again, we can still get the ball back twice. You have to put pressure on them to make four free throws potentially. We could also come down and shoot a three. We had people at the line. Keep in mind in that situation they’re going to be guarding the line pretty closely. They’re up three, 15 seconds. Typically you don’t foul that early. You would foul a little bit later than that if you want to foul. You know, I’m sure if Mike had to do it over again, he would have either gone or come to a jump stop. If he got jammed up there, I would have taken one and we would have had one left. That’s another reason you want to save them. Sometime as guy goes, he gets jammed up, there’s nothing going. You can sense a turnover, bad shot. You call it. They can run it, out of bounds play, manage the clock that way.

Q. Was Mike limited on that where he couldn’t probably take a three with his elbow problem? Is that not a good shot for him right now?
COACH McCAFFERY: I think that he probably doesn’t have great confidence in that shot right now and is probably reluctant to shoot that one there.

Q. How do you keep their confidence up after a game where they didn’t play so well?
COACH McCAFFERY: You just teach. You teach. You show them what they did right. You show them what they did wrong. You break down the next opponent. You stay together. He kept battling. It’s what this league is. If we would have won the game, it wouldn’t be any different. It would not be any different in terms of our approach. This is what we did well. This is what we didn’t do well. This is what we have to do against Northwestern. Everybody is as important as this game. That’s it. Thanks.