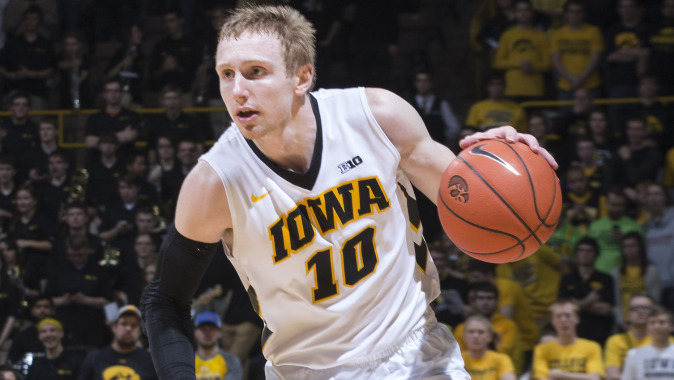 IOWA CITY, Iowa — Aside from winning, the aspect of basketball that University of Iowa junior Mike Gesell finds most rewarding is the assist.

The 6-foot-2 point guard from South Sioux City, Nebraska, established a season-high with nine assists Feb. 8 during the Hawkeyes’ 71-55 victory over No. 16 Maryland inside Carver-Hawkeye Arena.

Gesell flashed a greedy grin when thinking back on Iowa’s most recent outing against the Terrapins.

“Too bad I couldn’t get one more; I wanted to get double digits,” Gesell said. “When I get assists I feel like I’m scoring, too. One of my favorite things in basketball is when I can load my teammates up.”

Gesell has been doing more lately than filling the plates of teammates. In the last two games — an 18-point win at Michigan on Feb. 5 and a 16-point win against Maryland — Gesell has averaged 11 points and six assists a game, while shooting 73.3 percent from the field (11-of-15).

“It goes back to being aggressive,” Gesell said. “I can give myself a shot or open things for my teammates. It opens our whole offense and I think I have done a much better job of being selective of when to attack and when not to. That has come with the maturity of another season.”

While the last two games by Gesell have been impressive, the last four are more indicative of his consistency. Against Purdue, Wisconsin, Michigan, and Maryland, he has averaged 12 points and 4.3 assists per game. With Gesell running the show, the Hawkeyes have reached 70 points in a league game six times this season, including two games in a row.

“We’re rolling right now and we have to keep it going,” Gesell said. “We can’t hang our hats on those last two wins. A win is a win, no matter how many points you win by. Just because we won the last two by (18 and 16) doesn’t mean anything. We have to keep building on that and taking it one game at a time and finish the season strong.”

“Minnesota is going to be hungry, but that’s expected,” Gesell said. “Every game in the Big Ten a team is going to be coming at you, and we look to execute our game plan and do what we do.”

The game plan for Gesell might lead to scoring double-digit points or compiling that elusive double-digit assist total. Either way, he wants to create the best shot for the Hawkeyes.

“That could mean me getting to the basket or throwing a lob to Aaron White,” Gesell said. “That’s my job as a point guard.”

A maturing point guard at that.