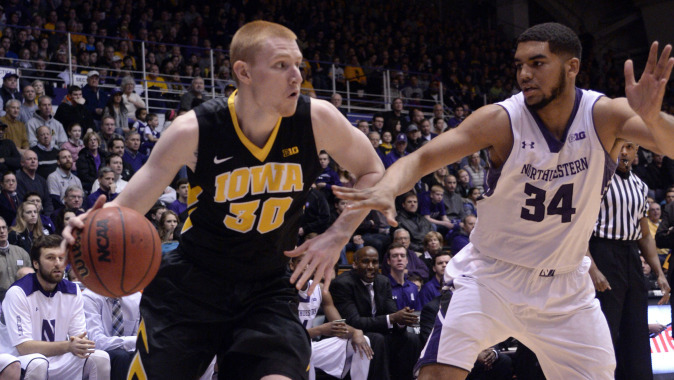 White ranks third in the Big Ten in rebounding (6.0 rpg) and 11th in scoring (14.6 ppg). He is seeking to become the first Hawkeye in nine years to finish the season leading the team in scoring and rebounding (Greg Brunner in 2006). White is one of only two active Division I players (Oklahoma’s TaShawn Thomas), and the only Hawkeye ever, with 1,650+ points, 825+ rebounds, 175+ assists, and 125+ steals. The native of Strongsville, Ohio, is also the only Division I player to shoot better than 50 percent from the field and 80 percent from the free throw line the last two seasons. White ranks sixth in Iowa career rebounding (826), seventh in scoring (1,666), 13th in double-doubles (13), and first in free throws made (563) and attempted (736).

“2015 marks the first year the Basketball Hall of Fame will recognize the top players in all positions in men’s college basketball,” said John L. Doleva, President and CEO of the Basketball Hall of Fame. “When it comes to power forwards who have had a drastic impact on the game, Karl Malone is at the top of the list. In terms of consistent play, “The Mailman” always delivered and we are delighted to include him in this recognition of the best power forwards in the game today.”

Karl Malone attended Louisiana Tech University due to its close proximity to his hometown of Summerfield, Louisiana. He led the Bulldogs to a Sweet 16 appearance and earned All-Southland honors in his three seasons while averaging 18.7 points and 9.3 rebounds per game. Malone achieved great success during his 19 seasons in the NBA as a 14-time NBA All-Star (1988-98, 2000-02), 11-time All-NBA First Team player (1989-99) and a member of the NBA’s 50th Anniversary All-Time Team. He also won two Olympic gold medals (1992, 1996).

White is 1-of-2 players recognized from the Big Ten (Maryland’s Jake Layman) and 1-of-3 from the state of Iowa (UNI’s Seth Tuttle and Georges Niang of Iowa State).

By early March, the current list of 16 finalists for the 2015 Karl Malone Award will be narrowed down to five players. The final five players in contention for the award will be presented to Mr. Malone and the Hall of Fame’s selection committee. The winner of the 2015 Karl Malone Award will be presented at ESPN’s new College Basketball Awards presented by Wendy’s from Club Nokia in Los Angele on Friday, April 10. The awards will be televised live on ESPN2 at 8 pm ET.