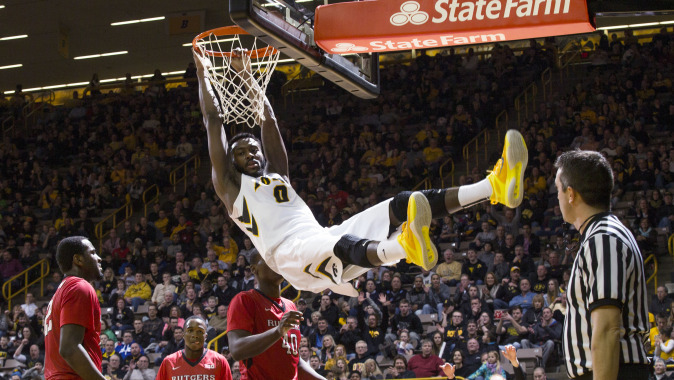 Q. Is it a good thing or a bad thing to get easy shots? You were executing your stuff good, but seems like you had shots easier than you have in usual Big Ten games.
COACH McCAFFERY: Every game’s different, so you’ve got to adjust to how that game is. Every coach has a different style. Every team has a different style. Every team has different strengths and weaknesses. So you just play that game, and then you move to the next one and you adjust if they are doing things differently.

Q. That’s your biggest margin of victory against a Big Ten opponent. Has to be some satisfaction of how you guys played tonight.
COACH McCAFFERY: Well, yes, no question. With regard to the first part of it, that’s kind of irrelevant to me as long as we win. I just want my guys to compete and play hard and execute and win. They did that. Yeah, I thought earlier on our effort level and our attention to detail was really good. We were a little bit complacent in the second half in terms of trading baskets, which was a little bit disconcerting at that point in time. But we got consecutive stops and we got our running game going, which is good.

Q. What message do you have to your team?
COACH McCAFFERY: Hey, it’s hard to win in this league. You get a win and you play well, I’m very respectful of what Rutgers was done. They were down 15 and they beat Wisconsin. They have two late wins. They played really well in some tough places, at Maryland, at Indiana. They have been really close. We did a good job on their two key guys. I think we did a good job on the glass. Eleven offensive rebounds is maybe more than we would have liked but some of that was late.

Q. The rest of your team as far as the next game, how do you carry this over?
COACH McCAFFERY: Well, what I normally do is I kind of deal with this one. Even though, okay, it’s behind us technically, I don’t look to Sunday yet. It’s like, okay, let’s talk about this game: What did we do well in this game; what didn’t we do well in this game; what can we learn from in this game. And then apply that as we get ready to play a very good team in a tough environment on the road, okay. We all know that game is going to be different. Just in terms of style and location, it’s going to be a different game.

Q. The first half, they turned the ball over and you scored off ten or 11 points, what was it about the defensive intensity?
COACH McCAFFERY: Well, I just think it was exactly that. It was activity. Was it picture perfect? Probably not. But there was activity. There were rotations. There was ball pressure. They run some Princeton stuff and we were up into them and made that hard, and Mac hit a couple shots. They have some guys that can make plays themselves. But again, it comes down to we got consecutive stops and we got some run outs, and I thought we executed: I thought our decision making, when to throw it inside, when to drive it, when to move it along, when to jump shoot it was really good.

Q. Going to a place where you’ve never played before, is that create any degree of difficulty?
COACH McCAFFERY: Every venue on the road in this league is tough. We’ve got three road games left and they are all going to be brutal on the road, and that’s how you want it when they come in here. So I respect that program. I respect Tim as a coach and they have got really good players. They have got a great atmosphere and that’s what it’s all about.

Q. You’re getting consistent play now from Uthoff. Do you kind of expect it?
COACH McCAFFERY: You know, again, I think it comes back to his activity. He can affect the game in a lot of ways. We kind of look at him sometimes as a scorer, which he is, but, I mean, he gets four steals; he was really active. We put him on Kadeem Jack, who is one of the better players in our league and did a great job defensively on him. I’m really happy for how he’s playing and as it relates to our team, and you know, for him.

Q. He got going pretty well early.
COACH McCAFFERY: He’s been practicing really well. I’ve been impressed with him. Again, it comes down to his activity level, moving without the ball, having a sense of when to hit the slip guy, when to move it on, when to shoot it, when to shot fake. He was out running: The one time he got the dunk in the second half, he sprinted and got wide and influenced the defense and opened up that opportunity for Whitey, and that’s what you have to do.

Q. How important was it to re establish the inside game?
COACH McCAFFERY: I think it’s very important. I think that’s who we are. You know, you want to kind of do that every game and establish it, like you said, and then also mix it up: Some perimeter shooting, some penetration, some post up, some transition, and kind of attack with all of those things in mind.