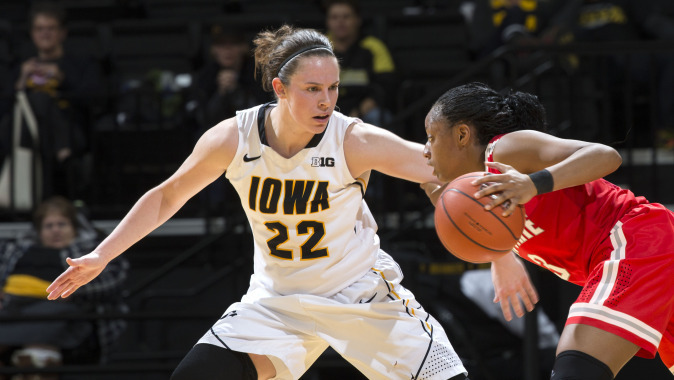 WATCH THE ACTION:
Saturday’s contest will be broadcast live on BTN and BTN2Go. Lisa Byington and Debbie Antonelli will call the action. Iowa is 18-1 when playing on BTN since the start of last season.

QUICK HITS:
? Head coach Lisa Bluder, the 2015 Carol Eckman Award winner, has 299 career wins at Iowa.
? Iowa is ranked No. 13 in the Associated Press Top-25 poll and No. 11 in the USA Today Coaches poll, marking the highest it has been ranked in the Coaches poll since the 1996-97 season.
? Iowa’s NCAA RPI (Feb. 20) is No. 7. Iowa is 11-4 against teams in the top 55 of the RPI.
? Iowa is in second place in the Big Ten at 12-3, one game ahead of Rutgers (11-4).
? The Hawkeyes have won at least 20 games for the seventh time in the last eight seasons.
? Iowa All-American Samantha Logic, the NCAA’s active career assists leader (825), is fourth all-time in assists in Big Ten history. Penn State’s Tina Nicholson (826 assists) is third. Logic is only the 28th player in NCAA history to record 800 assists or more in her career.
? Iowa’s Melissa Dixon leads the nation in 3-point field goals per game (3.77), while Ohio State’s Kelsey Mitchell is second (3.74).
? Ally Disterhoft has scored in double figures in 39 of her 43 career starts. Iowa is 34-9 when Disterhoft starts. She made her first career start in Iowa’s 81-74 win last year at Ohio State (24 points, 10 rebounds).
? Iowa set the school record for scoring offense (78.2) last season, leading the league in scoring while notching the second-most points in a season in Big Ten history (2,814). The Hawkeyes rank ninth nationally this season (79.3).
? Iowa is the only Big Ten team, and one of only 14 teams in the country, to appear in the last seven NCAA Tournaments. There are 349 Division I teams.
? Iowa is 48-14 overall and 18-1 in games aired on BTN since the start of last season.

SCOUTING OHIO STATE:
? Ohio State is 18-9 overall and 10-5 in Big Ten play, two games behind Iowa.
? The Buckeyes have won three home games (Indiana, Michigan, Purdue), and lost at Illinois, since losing at Iowa on Feb. 5, 73-65.
? Ohio State is 13-3 at home this season, including 7-1 at home in league play. ? Kelsey Mitchell (24.9 points per game) and Ameryst Alston (20.1) make up the top-scoring back court in the country. Mitchell is second nationally and first in the Big Ten in scoring, while Alston is third in the Big Ten.
? Ohio State is coached by Kevin McGuff. He is in his second season.

SERIES HISTORY/NOTES:
? Iowa and Ohio State have met 62 times. Each team has won 31 contests.
? The Hawkeyes have won the last five meetings in the series, including all three last season.
? Iowa won the first meeting this year in Iowa City, 73-65. The home team held Mitchell (15 points) and Alston (11 points) well below their season scoring averages.
? The Hawkeyes won in Columbus last year, 81-74. Ally Disterhoft scored 24 points and grabbed 10 rebounds in her first career start. She was 12-of-12 from the free throw line and made six in a row during the final 28 seconds.
? Iowa’s Melissa Dixon leads the nation in 3-point field goals per game (3.77), while Ohio State’s Kelsey Mitchell is second (3.74). Dixon has made 98 in 26 games, and Mitchell has converted 101 in 27 games. No other player nationally has more than 79. Dixon has attempted 216 3-pointers this year, and Mitchell has attempted 269.
? Ohio State is second in the Big Ten and eighth nationally in scoring offense (79.6), while Iowa is third in the conference and ninth nationally (79.3).
? Iowa leads the Big Ten in 3-point field goal percentage (39.2%). The Hawkeyes (8.2/game) and Buckeyes (7.6) lead the league in 3-pointers.

THE NATION’S LEADING 3-POINT SHOOTER:
? Iowa senior Melissa Dixon is leading the nation in 3-point field goals, averaging 3.77 per game.
? Dixon is second in the Big Ten and seventh nationally in 3-point percentage (45.4%).
? Dixon has made 98 in 26 games, while Ohio State’s Kelsey Mitchell has made 101 in 27 games. No other player in the country has converted more than 79. Dixon has attempted 216 3-pointers this year, and Mitchell has attempted 269.
? Dixon is third in Big Ten history with 308 career 3-pointers.
? Dixon made six 3-pointers (6-of-10) in the win at Rutgers on Jan. 4, surpassing Lindsey Meder (261) for the most in Iowa history.
? She scored 31 points in Iowa’s win at Drake on Dec. 21, making 10 3-pointers (10-of-14), setting a new school record. The previous school record was seven, accomplished five times in program history, twice by Dixon; the NCAA and Big Ten record for 3-pointers in a single game is 12.
? Dixon finished 9-of-10 from 3-point range in Iowa’s 102-99 win at Northwestern (Jan. 29).

MOVING UP CAREER CHARTS:
? Samantha Logic (825 career assists) surpassed Cara Consuegra (1997-2001; 576) as Iowa’s all-time assists leader during Iowa’s win at Illinois on March 2, 2014, during the 2013-14 regular season finale. She is fourth in Big Ten history. Tina Nicholson of Penn State is third (826). Nancy Kennelly of Northwestern is second (892) and Ohio State’s Samantha Prahalis is first (901).
? Melissa Dixon is Iowa’s career record holder for 3-pointers (308). She is third in Big Ten history. Kelly Mazzante of Penn State is second (357), while Maggie Lucas of Penn State is the Big Ten record holder (365).
? Bethany Doolittle is second all-time in program history with 248 career blocks. Morgan Johnson is first with 293.

UP NEXT:
The Hawkeyes return home to conclude the regular season next week, hosting Wisconsin on Thursday, Feb. 26, at 7 p.m. (CT), and Minnesota on Sunday, March 1, at 2 p.m.