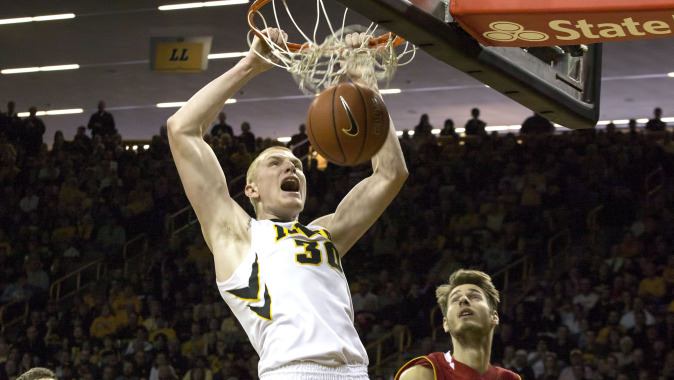 IOWA CITY, Iowa — Four years ago, the only University of Iowa lists that contained the name Aaron White were a student directory and the Hawkeye men’s basketball roster.

With four regular season games remaining in his career, the 6-foot-9 senior forward from Strongsville, Ohio, has fixed himself to plenty more.

White is the school’s all-time leader in free throws made (570 and counting), he is the only player in the country to shoot better than 50 percent from the field (50.9) and 80 percent from the line (80.8), he ranks first in the nation in highest percentage of points scored from the free throw line (37.1), and his 14 career double-doubles are second-most among active Big Ten players.

With an average of 7.1 rebounds per game in 27 outings this season, White is on pace to become the first Hawkeye to lead the team in rebounding four consecutive seasons. His 1,697 points is fifth in Iowa history, eight points from tying B.J. Armstrong for fourth.

With each name he passes, White digests another Hawkeye history lesson. Before he committed to the University of Iowa, White knew little about Hawkeye lore. The only game he watched was an infamous 64-63 loss to Northwestern State in the 2006 NCAA Tournament.

“That was the only history I knew before I got recruited,” White said.

The most recent company White has joined is an elite group consisting of two others. Only White, Acie Earl, and Greg Stokes have compiled at least 1,600 points and 800 rebounds during their college careers.

“Those two in particular were two guys I hadn’t heard of until I got here,” White said. “I played with Darius (Stokes), so I knew his dad played here, but I didn’t know he was as big-time as he was. In order to be on that list you have to be pretty good. I guess I have done something alright in my career.”

“You can’t take me off that list now,” White said. “Hopefully people remember the good things I have done here and the positive energy I brought to the program. It’s pretty special but it will be better after the year I think. I will look back on my career and see what I did.”

White is focused on playing in multiple NCAA Tournaments, something Stokes and Earl did during their careers. The Hawkeyes earned a trip to the Big Dance last season, falling in the first round to Tennessee, 78-65, in Dayton, Ohio. Iowa (17-10 overall, 8-6 Big Ten Conference) faces Illinois (17-10, 7-7) on Wednesday inside Carver-Hawkeye Arena. Tip-off is 8:06 p.m. (CT).

“It would be nice to do something that hasn’t been done in a while,” White said. “But you have to win the next one on the schedule and that’s how I’m viewing. We’ll be ready for tomorrow and go from there.”