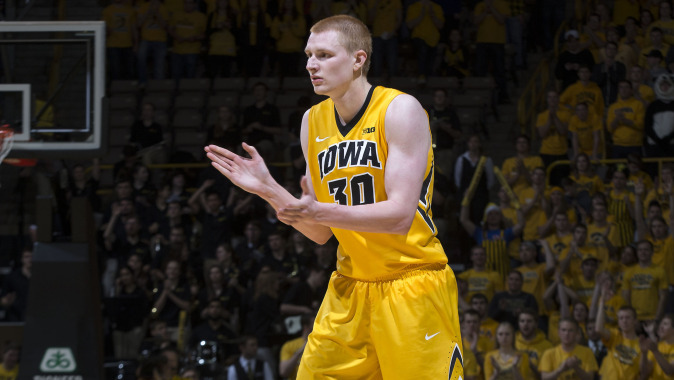 IOWA CITY, Iowa — There was a good week, a bad week, and a good week. A second-straight good week sounds good to University of Iowa senior forward Aaron White.

It starts Wednesday with Illinois coming to Mediacom Court inside Carver-Hawkeye Arena for an 8:06 p.m. (CT) tipoff. Iowa is tied for sixth in the Big Ten Conference standings at 8-6, 17-10 overall; the Fighting Illini are eighth at 7-7, 17-10 overall.

“It’s going to be a tough game for us,” said White, who is nine points from surpassing Iowa legend B.J. Armstrong for fourth place on the program’s all-time scoring list. “They’re a physical, athletic team, and they’re fighting for their postseason lives. It’s going to be a good game and atmosphere; I am looking forward to it.”

Illinois has dropped back-to-back games since winning four-straight and 5-of-6 contests. The Illini lost at No. 5 Wisconsin, 68-59, on Feb. 15 before being on the short end of a 60-53 decision against Michigan State on Feb. 22 in Champaign.

The Hawkeyes will have to contend with a three-headed monster in the Fighting Illini backcourt in guards Rayvonte Rice (15.9 points, 6.4 rebounds), Malcolm Hill (14.7 points, 5.2 rebounds), and Kendrick Nunn (11.5 points, 34 steals). All three players are shooting at least 41 percent from the floor and 3-point range.

“(Their 3-point shooting) puts a lot of pressure on your defense, how you plan to guard them,” UI head coach Fran McCaffery said Tuesday at his weekly news conference. “They’re willing to give it up, which is good. It’s not like only one guy gets it and puts his head down. They’ll give it up, move on.”

Wednesday’s game is the lone meeting this season due to the unbalanced Big Ten schedule. The two teams split last season with the road teams prevailing. Iowa has won three of the last four meetings, but the Illini won the most recent matchup, 66-63, spoiling last season’s Senior Day festivities.

The Hawkeyes enter the second-to-last week of the regular season playing their best basketball of the year. Iowa cruised to two wins by an average of 31 points last week, winning by 34 points at home against Rutgers and dismantling Nebraska on the road by 28 points.

“There is no complacency and there shouldn’t be any complacency because we haven’t done anything,” he said. “We won two games, but let’s win three. We haven’t won three in a row in the Big Ten all year.”

Iowa has posted a three-game league winning streak once in each of the past two seasons, but the Hawkeyes haven’t won four-straight in Big Ten action since the 2006 season.

Another good week would be significant for the 2014-15 Hawkeyes

“Let’s make that happen, and we’ll go from there,” said White.

Wednesday’s game will be televised on BTN with Kevin Kugler and Shon Morris on the call. Tickets remain by calling 1-800-IA-HAWKS or at hawkeyesports.com.