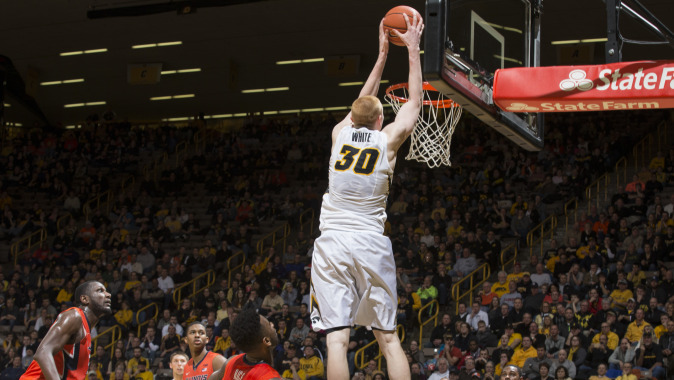 COACH McCAFFERY: Just want to begin by thanking our fans. I looked out the window today at about 12 and I thought, wow, it’s coming down really good. We drove to pregame and it was really hard, and I was wondering what kind of crowd we would get because I felt like we needed a big crowd tonight, and they were absolutely spectacular. You can’t say I mean, you can’t come up with a superlative to thank them enough for the atmosphere in this building and the impact it had on our ability to win a very competitive game.

Q. That was as intense a game I’ve seen in a long time.
COACH McCAFFERY: Right away, right from the opening tip it was physical. I mean, I looked up and we were in the double bonus with about 9 minutes to go, 10 minutes to go in the first half.

Q. Could this be Aaron White’s best game?
COACH McCAFFERY: What was great about him, I think, was his energy level. Because normally midway through the second half I’m trying to figure out how to get him out and rest him. He didn’t want to come out. I ended up taking him out for a very short period. But his ability to affect the game at both ends, you know, on the glass, defensively in transition at half court, I mean, he was having fun.

Q. You had 14 straight points in the second half. How big of a lift was that?
COACH McCAFFERY: It was huge. It gave us a little bit of separation. There wasn’t a whole lot of separation up to that point.

Q. You guys lost two straight. It seemed like especially Aaron had become that senior, you talk about senior moments, it seems like he’s been a week or two?
COACH McCAFFERY: Yeah, but if you go back, he had a similar performance against Ohio State here. Just put us on his back in that one stretch in the second half, very similar to that game.

Q. Late in the first half you had a couple of really nice post feeds and it looked like a good performance for him.
COACH McCAFFERY: He was fabulous. Again, I always go back and talk about his defense. His defense was spectacular. He shoots three assists, two for two, and he doesn’t make mistakes. Except for that one pass that I’m still trying to figure out what he was doing. But he saw something that none of the rest of us saw, I guess.

Q. He seemed to be really comfortable with Anthony Clemmons. Did you feel that with that defense?
COACH McCAFFERY: Yeah, I thought he was great. He played with energy. He drove the ball. He passed it well. Defensively he was spectacular. No mistakes in his decision making. It was flawless. A lot of times, especially when I knew they were going to come after us like they did, that’s what they do all the time. They come after you with that 2 1 1, and I felt like we needed two point guards in there.

Q. You come up with big three pointers. I think tonight you had three and had a couple the other day. He hadn’t been consistent from there before, but what was it about his stroke?
COACH McCAFFERY: He’s got a great stroke. He’s got the green light to shoot it. We encourage him to shoot it. He works on it, and you’re seeing some go in now and you can tell that he feels good letting it go. It’s got some lift on it, and it’s nice and soft so it changes everything for us because now it spreads the defense even more because they’re worrying about him and Uthoff and Pete if he’s in the game, and it allows our drivers to drive and our big guys to post.

Q. What would you say to how your team has responded in this crucial stretch of the season?
COACH McCAFFERY: I think we’ve had tremendous focus and concentration on the game plan because each game was dramatically different in terms of two at home, one was away, different things to focus on defensively. Different things we had to do offensively. As a coach you can’t ask for anything more than how they have responded and understanding that concept. Then you’ve got to go out and compete. I mean, we have really competed in these three games. We’ve got three more and the plan is for that to continue.

Q. Coach, they got to the line 30 times tonight. Is that another point of running the offense the way you wanted?
COACH McCAFFERY: That and our transition. A lot of times we get there in transition, and we really tried to push it. Get stops and go, and get our bigs out, look ahead, throw it, throw it inside, attack them before they set their defense, that kind of thing. Then when we got into the bonus, then you want to drive the ball whether you’re at half court or whether you’re in transition.

Q. How much does (No Microphone) getting back to a hundred percent make a difference?
COACH McCAFFERY: Well, he’s a handful. He’s 230 pounds and he’s quick, and he’s shooting the ball well from three. So you’ve got to go out there and play him. He can drive left, he can drive right. He’s better going right, but he finishes. He makes his free throws. But what it does, it enables Hill and Nunn and Starks the freedom to do what they do because you’ve really got to focus your defense on Rice. He’s going to score a thousand points in two different places, that’s pretty good.

Q. He handled Hill really well?
COACH McCAFFERY: I thought he did a good job on Hill. To be honest with you, watching film the way I have in the last couple days, I think he’s one of the best players in our league. I’ve been really impressed with him. And I thought Jarrod did a really good job in terms of not going for shot fakes and taking advantage of his length because Jarrod’s taller. Nunn, he’s an attack guy, an active defender. He made a big three late. Again, those two guys are two of the best players in our league and they’re only sophomores.

Q. Speaking of Jarrod, he’s acquired a game offensively, but affects the game on the defensive end.
COACH McCAFFERY: He does the last two games. Four blocks, ten rebounds, boy, he was terrific. You know in that respect, he missed his free throws tonight which he normally doesn’t do. He took a couple crazy. But we’ve been encouraging him to shoot the ball. I wasn’t sure about the one where he pulled up from 40. But he was open, I guess.

Q. Mike proved he’s pretty athletic in the second half. You talk about the crowd, he surprised the crowd, but I don’t think he’s surprised you guys?
COACH McCAFFERY: No, I’ve seen it. I’ve been watching him for so long. He’s got big time ups. We could run a lot of plays for him if he wanted to. He’s got that kind of athletic ability. But what I was impressed with was the action that we ran, it’s all a read. We’ve got action going one way, space going the other way. He took the space and we made a great play and really impacted the game. I think at that point we went up 12.

Q. A lot is on the line. It’s one game, but I mean, how your team performed in that one game?
COACH McCAFFERY: Well, that is really important in terms of our ability to compete, our ability to follow the game plan, our ability to defend a talented, offensive team; our ability to rebound against a big, strong, quick, athletically gifted team. That’s going to be critical because that’s who we’re facing every game from here on out. You don’t want to get too excited about this game in and of itself because we’ve got to go on the road and play a really good team on Saturday.

Q. Two months ago there was an opposing coach who came in and talked about your guys hanging their heads. Since Big Ten play really started you’ve seen a resiliency out of this team. Whether you lose a couple games in a row, you come back, bounce back, and then this game.
COACH McCAFFERY: Well, I appreciated his point, and I understand what he was saying. I think he was trying to be positive with regard to his outlook on our team. I think you always appreciate that from an opposing coach. I will tell you this, I never felt like we hung our heads. I have been so impressed with this team’s resiliency and their ability to get up the next day and put a loss behind them and not get too high after a win and refocus on what’s important. I think we have tremendous respect for this league, the talent and coaching in this league and what’s required to prepare to play the next team on your schedule. If you get too excited, you’re going to get clipped the next time you play. So we’ve taken a very business like approach, and proud of my guys.