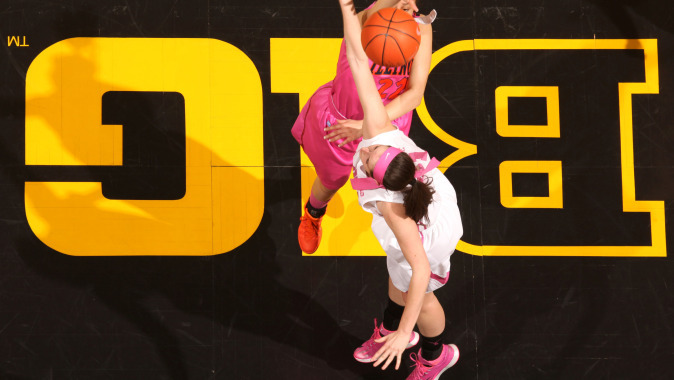 WATCH THE ACTION:
Thursday’s contest can be seen for a fee on BTN Plus via BTN2Go.

QUICK HITS:
? Head coach Lisa Bluder, the 2015 Carol Eckman Award winner, has 299 career wins at Iowa.
? The Hawkeyes are 14-0 at home this season. The program record for wins at home in a single season is 15, when Iowa finished 15-0 during the 1992-93 season. Iowa has finished perfect at home in four different seasons.
? Iowa is ranked No. 17 in the Associated Press Top-25 poll and No. 13 in the USA Today Coaches poll. Iowa has been ranked in all 16 weeks this season.
? Iowa’s NCAA RPI (Feb. 25) is No. 8. Iowa is 11-5 against teams in the top 55 of the RPI.
? Iowa is in second place in the Big Ten at 12-4, one game ahead of Northwestern, Rutgers, and Ohio State (11-5).
? Iowa has won the last 14 meetings against Wisconsin, including an 87-75 win in Madison on Feb. 8.
? Iowa senior and Wisconsin native Samantha Logic scored a career-best 30 points in the win earlier this season in Madison.
? Logic, the NCAA’s active career assists leader (831), is third all-time in assists in Big Ten history. Logic is only the 28th player in NCAA history to record 800 assists or more in her career.
? Logic is the first player in NCAA history to record at least 1,400 career points, 800 rebounds, 800 assists, and 200 steals.
? Iowa set the school record for scoring offense (78.2) last season, leading the league in scoring while notching the second-most points in a season in Big Ten history (2,814). The Hawkeyes rank ninth nationally this season (79.4).
? Iowa is the only Big Ten team, and one of only 14 teams in the country, to appear in the last seven NCAA Tournaments. There are 349 Division I teams.
? Iowa’s Melissa Dixon leads the nation in 3-point field goals per game (3.77), while Ohio State’s Kelsey Mitchell is second (3.74).
? Ally Disterhoft has scored in double figures in 39 of her 43 career starts. Iowa is 34-9 when Disterhoft starts. She made her first career start in Iowa’s 81-74 win last year at Ohio State (24 points, 10 rebounds).
? Iowa is 48-14 overall and 18-1 in games aired on BTN since the start of last season.

SERIES HISTORY/NOTES:
? Iowa leads the all-time series, 44-20.
? The Hawkeyes are 23-5 all-time against Wisconsin at Carver-Hawkeye Arena.
? Iowa has won the last 14 meetings overall, including an 87-75 win in Madison on Feb. 8.
? Senior Samantha Logic is a native of Racine, while freshman Carly Mohns hails from Brodhead, Wisconsin.
? Iowa’s Melissa Dixon is 10th nationally in 3-point field goal percentage (44.1%), while Wisconsin’s Nicole Bauman is third (46.6%).
? The Hawkeyes lead the league in 3-point field goal percentage (38.7%), while Wisconsin is fourth (36.5%).

LOGIC NAMED LIEBERMAN AWARD FINALIST FOR 2ND-STRAIGHT YEAR:
? Senior point guard Samantha Logic has been named a finalist for the 2015 Nancy Lieberman Award, the Naismith Memorial Basketball Hall of Fame announced on Feb. 23. It marks the second-straight year Logic has been named a finalist.
? The award recognizes the top point guard in women’s NCAA Division I college basketball. Candidates exhibit the floor leadership, play-making and ball-handling skills of Hall of Famer Nancy Lieberman.

NAISMITH TROPHY LIST NARROWS, LOGIC MAKES THE CUT:
? Samantha Logic remains in the running for the Naismith Trophy, appearing on the Midseason 30 list released by the Atlanta Tipoff Club on Feb. 11.
? Logic is one of three players from the Big Ten Conference to appear on list, joining sophomore Lexi Brown of Maryland and sophomore Tyler Scaife of Rutgers.
? The award is given to the women’s college player of the year in early April.

THE TOP 3-POINT SHOOTER IN THE LAND:
? Iowa senior Melissa Dixon is leading the nation in 3-point field goals per game, averaging 3.7, along with Ohio State’s Kelsey Mitchell.
? Dixon is second in the Big Ten and 10th nationally in 3-point percentage (44.1%).
? Dixon has made 100 in 27 games, while Ohio State’s Kelsey Mitchell has made 104 in 28 games. No other player in the country has converted more than 85. Dixon has attempted 227 3-pointers this year, and Mitchell has attempted 275.
? Dixon is third in Big Ten history with 310 career 3-pointers.
? Dixon made six 3-pointers (6-of-10) in the win at Rutgers on Jan. 4, surpassing Lindsey Meder (261) for the most in Iowa history.
? She scored 31 points in Iowa’s win at Drake on Dec. 21, making 10 3-pointers (10-of-14), setting a new school record. The previous school record was seven, accomplished five times in program history, twice by Dixon; the NCAA and Big Ten record for 3-pointers in a single game is 12.
? Dixon finished 9-of-10 from 3-point range in Iowa’s 102-99 win at Northwestern (Jan. 29).

MOVING UP CAREER CHARTS:
? Samantha Logic (831 career assists) surpassed Cara Consuegra (1997-2001; 576) as Iowa’s all-time assists leader during Iowa’s win at Illinois on March 2, 2014, during the 2013-14 regular season finale. She is third in assists in Big Ten history. Nancy Kennelly of Northwestern is second (892) and Ohio State’s Samantha Prahalis is first (901).
? Melissa Dixon is Iowa’s career record holder for 3-pointers (310). She is third in Big Ten history. Kelly Mazzante of Penn State is second (357), while Maggie Lucas of Penn State is the Big Ten record holder (365).
? Bethany Doolittle is second all-time in program history with 249 career blocks. Morgan Johnson is first with 293.

ANOTHER TOP ATTENDANCE YEAR:
Iowa currently ranks 15th in average attendance (4,939) and 14th in total attendance (69,144). Iowa ranked 22nd in the country in attendance last season, averaging 4,395 fans per contest. Last year marked the fourth-straight season that Iowa has ranked inside the top 25 in attendance. The Hawkeyes were 19th in attendance in each of the previous two years, and were 13th in 2010.

UP NEXT:
The Hawkeyes conclude the regular season on Sunday, hosting Minnesota at 2 p.m. (CT) for Senior Day. The game will be broadcast live on BTN.