No. 24 Iowa Travels to UC Davis for Quad Meet 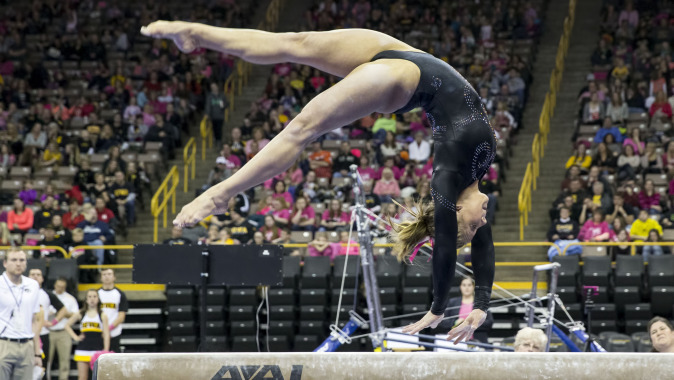 THIS WEEK:
The University of Iowa women’s gymnastics team will travel to Davis, California, to take on UC Davis, Sacramento State, and Central Michigan this Friday, Feb. 27. The meet is scheduled to begin at 7 p.m. (CT) inside the Pavilion.

Sacramento State placed third (194.150) in a quad meet hosted my UCLA on Feb. 21. The score marked the team’s highest road score of the season. The Hornets are currently 5-11-1.

LAST TIME OUT:
The GymHawks posted a 195.850 to place second in an away tri-meet on Feb. 21. Five GymHawks finished in the top five of individual events and two freshman GymHawks recorded season best scores. Sophomore Angel Metcalf tallied a 9.825 on beam and finished first overall in the event. Sophomore Mollie Drenth and senior Johanny Sotillo both posted a 9.800 and tied for fourth place in the event. On floor, senior Sydney Hoerr let the GymHawks with a 9.875, taking fifth overall and adding to the team score of 49.000. Freshman Ashley Fischer made her mark on vault, posting a season best score of 9.825, rounding out Iowa’s total score of 49.025. The GymHawks ended the night on bars; where Drenth lead the charge with a score of 9.825 and taking second place overall in the event. Freshman Melissa Zurawski tallied a season best score of 9.800 and good enough to tie for fourth place overall with teammate Sotillo.

UP NEXT:
Iowa returns to Carver-Hawkeye Arena for its final home contest of the season against Iowa Corn Cy-Hawk Series rival Iowa State on Friday, March 6. The meet is scheduled to begin at 7 p.m. (CT).