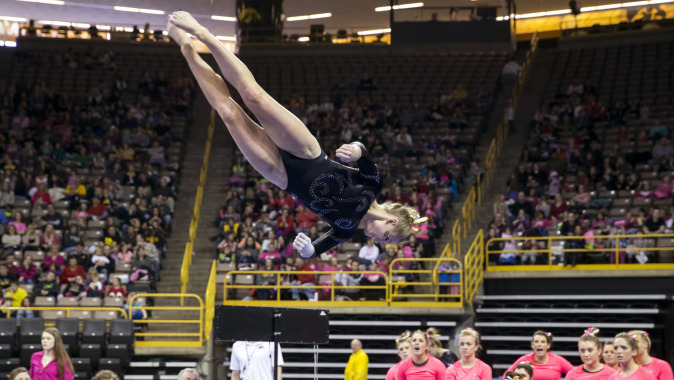 THIS WEEK:
The University of Iowa women’s gymnastics team will travel to Minneapolis, Minnesota, to take on No. 14 Minnesota and New Hampshire in a tri-meet on Saturday, Feb. 28. The meet is scheduled to begin at 6:30 p.m. (CT) inside the Sports Pavilion.

LAST TIME OUT:
The GymHawks posted a 195.850 to place second in an away tri-meet against No. 7 Denver and BYU on Feb. 21. Five GymHawks finished in the top five of individual events and two freshman GymHawks recorded season best scores. Sophomore Angel Metcalf tallied a 9.825 on beam and finished first overall in the event. Sophomore Mollie Drenth and senior Johanny Sotillo both post- ed a 9.800 and tied for fourth place in the event. On floor, senior Sydney Hoerr let the GymHawks with a 9.875, taking fifth overall and adding to the team score of 49.000. Freshman Ashley Fischer made her mark on vault, posting a season best score of 9.825, rounding out Iowa’s total score of 49.025. The GymHawks ended the night on bars; where Drenth lead the charge with a score of 9.825 and taking second place overall in the event. Freshman Melissa Zurawski tallied a season best score of 9.800 and good enough to tie for fourth place overall with teammate Sotillo.

UP NEXT:
Iowa returns to Carver-Hawkeye Arena for its final home contest of the season against Iowa Corn Cy-Hawk Series rival Iowa State on Friday, March 6. The meet is scheduled to begin at 7 p.m. (CT).