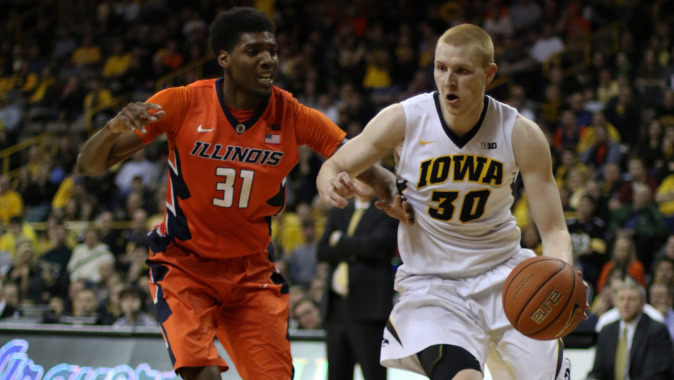 ROSEMONT, Ill. — University of Iowa senior Aaron White was named Big Ten Player of the Week. The announcement was made Monday by the Big Ten Conference office.

The honor is the first of White’s career and the second for a Hawkeye this season. Junior Jarrod Uthoff earned the accolade Jan. 6 following his performances in Iowa victories at Ohio State and against Nebraska. White earned Big Ten Freshman of the Week three times during the 2011-12 campaign.

White poured in a game and career-high 29 points, bolstered by a career-high three 3-pointers and 10-of-12 from the foul line, in Iowa’s home win over Illinois on Feb. 25. The 29 points are the most by a Hawkeye against Illinois since James Moses netted 30 in 1991. White became the second player to post 29-or-more points and nine-or-more rebounds versus Illinois since 1996-97 (Ohio State’s Evan Turner).

In Iowa’s overtime triumph at Penn State on Feb. 28, White grabbed a season-high 14 rebounds and scored 21 points, marking the second straight contest that the senior scored 21+ points. White was 6-of-6 from the foul line in overtime to preserve the win. White became the third Hawkeye to register at least 21 points and 14 rebounds in a Big Ten road game since 1996-97 (Jared Reiner at Indiana in 2003 and Greg Brunner at Indiana in 2004).

White and the Hawkeyes have won four straight Big Ten games, its longest streak since 2006. Iowa (19-10, 10-6) returns to action Tuesday when it travels to Bloomington, Indiana, to face Indiana (19-10, 9-7). Tipoff from Assembly Hall is scheduled for 6:04 p.m. (CT). The game will be televised nationally on ESPN (WATCHESPN).