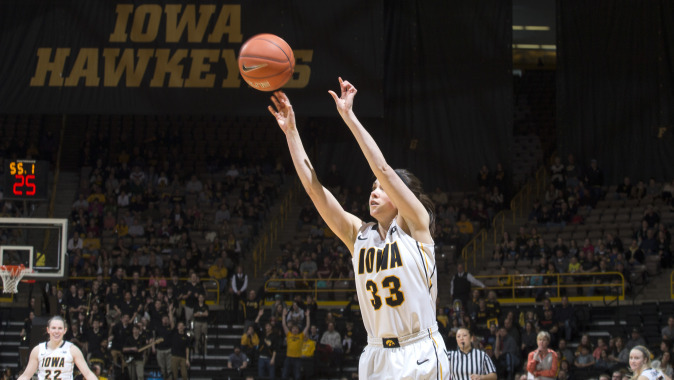 The $1,000 Charles T. Stoner Law Scholarship Award, named for and presented by Stoner, a former legal consultant to the WBCA, is awarded annually to one female collegiate basketball player who intends to pursue a career in law.

“I am thrilled to present Kathryn with the Charles T. Stoner Law Scholarship Award, said WBCA Executive Director Danielle Donehew. “Kathryn has proven to be an astute student, and a great competitor on the court. Throughout her time at the University of Iowa, she has learned invaluable lessons that will allow her to succeed in her future endeavors.”

During her tenure at Iowa she has connected on 40 percent of her shots from the field, 34 percent from beyond the arch and 83 percent from the stripe. She is a two-time Academic All-Big Ten honoree and a two-time Big Ten Distinguished Scholar.

The Cincinnati, Ohio, native needed just three years to graduate with distinction with a degree in business administration and an emphasis on management. While dedicating her time across multiple platforms, Reynolds maintained a 3.69 grade-point average. Away from the basketball court, she has donated her time to volunteering in her community with Habitat for Humanity, Hawkeye PRIDE/Community School Tutoring Program, and as a Ronald McDonald House volunteer among others. On campus, Reynolds has also served on the Iowa Student Athlete Advisory Committee the past three years and was voted to a leadership role as the organization’s treasurer this past year. Additionally, she has been asked to serve as a student-athlete representative for the Presidential Committee on Athletics Student-Athlete Well-Being Subcommittee.

Reynolds was a nominee for the 2014 WBCA Allstate Good Works Team for her contributions on and off the court.

Reynolds will be formally recognized during the WBCA Awards Show, which will be held at 4:30 p.m. (CT) on Monday, April 6, in the Tampa Convention Center. This event is part of the WBCA National Convention, and is held in conjunction with the NCAA® Women’s Final Four® in Tampa Bay.

Reynolds and the 14th-ranked University of Iowa women’s basketball team finished second in the Big Ten and earned the No. 2 seed in the 2015 Big Ten Conference Tournament. The tournament, set for March 4-8 at Sears Centre Arena in Hoffman Estates, Illinois, features a five-day format for the first time in conference history.

Iowa (23-6, 14-4) earned a double-bye in the inaugural 14-team format. The Hawkeyes will open play Friday at 6 p.m. (CT), facing seventh-seeded Nebraska or 10th-seeded Illinois. The winner will play at approximately 8:30 p.m. on Saturday in the semifinals, while the championship game is set for Sunday at 6 p.m.