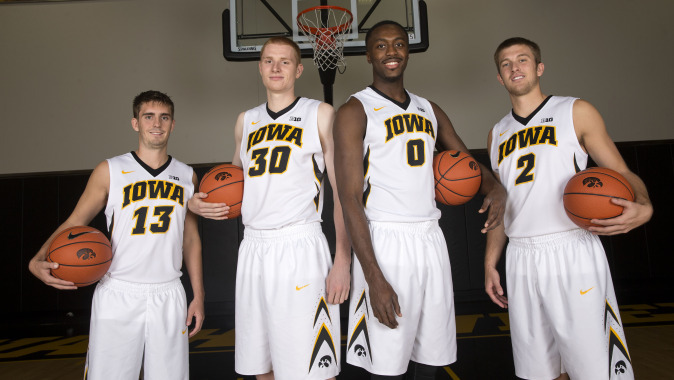 Q. Aaron had the mindset that he wasn’t going to let you down.
COACH McCAFFERY: I think that’s a fair statement. It was right off the bat. I’ve been doing this awhile, and senior days can be tricky. There’s so much emotion. Family is in town. It’s such an incredible journey this season, but also from the minute they got here. When you think about the beginning of the recruiting process for these guys, how they ended up here, how much time their families spent with the other families. It’s such an unbelievable experience for each of them. Everybody wants it to end perfectly. It doesn’t always do that. You get a little bit sideways, you’re so hyped up you can’t make a shot, you get in foul trouble. There’s so many things that can happen. I thought from an energy level standpoint, from the beginning, we were really locked in. When you’re playing Northwestern, with the way they’re playing, the stuff that they run, it’s really hard to guard unless you stay after it. You have to stay after them ’cause there’s action coming on both sides that’s going to be continuous. Except for that two or three minute stretch in the second half when we were trading baskets, we were locked in defensively, got a lead and kept it.

Q. Talking about the defense, at the end of last season that’s what got away from you. This team makes a concerted effort to be successful in that area.
COACH McCAFFERY: There’s no question that has been the reason we have won six games in a row. It’s probably the reason we’ve won 21 games, too. We have been a better defensive team this year than we were last year. If you want to be a team that contends for a championship, you better play defense.

Q. (No microphone.)
COACH McCAFFERY: I said that to them after the game, I said it on the radio a minute ago. As you go through it, Josh is a little different because he’s from Cedar Rapids. He wanted to be a Hawk. He wanted to be part of the resurgence. Whitey just wanted a chance to play. He believed in himself. Josh believed in himself. Doesn’t matter what happened before I got here. We’re going to change that. We’re going to have the confidence and belief in ourself. Gabe is the same way. He comes from a foreign country. He doesn’t know we won 13 games. Doesn’t know who Marble is. Coaches are recruiting me, I think I can get better playing for those guys. He came and looked at it, fell in love with the place, with the city. Now you have guys that say, You know what, together we can get this thing done. I think that’s the greatest feeling as a coach.

Q. When you called the timeout late in the game to give the seniors a curtain call…
COACH McCAFFERY: That’s always an incredibly emotional thing. I think of Matt Gatens, Eric May, Jarryd Cole. Obviously these three guys. Basabe, we go so far back. McCabe. McCabe didn’t have to come play for me. But they believed in me. Together we battled and we improved it. I said we would get this place rocking and rolling. It was so great today. The energy level in the building really wouldn’t let us lose. But that’s what this business is, it’s the relationships and watching a guy overcome some adversity, whether it’s through injury or he struggles. You look at Josh, he was struggling, he’s playing great now. I’m so proud of him. Gabe was stumbling and fumbling around as a freshman. You watch him now dominate games, get invited to Portsmouth, an NBA predraft camp. Aaron White. I remember having conversations with people. I said, you know what, this guy can play for me. You look at what he’s done. It’s pretty amazing when you look at all the different statistical categories that he has impacted. Most importantly how that affects our ability to win and how it affects his teammates’ ability to be successful. I think that’s to me the true measure of greatness. I think that’s thrown around way too much: He makes his teammates better. That really doesn’t happen very much. But it happened in this case.

Q. (Question about Gesell)
COACH McCAFFERY: We said to him, you have got to read when we’re moving the ball side to side, when you’re going to take it off the screen. Is it open at the rim or not? Boy, he made some great feeds at the rim. Last time, couldn’t get anything done. We had a ton of dunks at the rim today.

Q. Anything that Aaron has done that you didn’t think he could do when you brought him in here?
COACH McCAFFERY: No. It’s funny, because when I talked to his AAU coach, Mike Duncan, Mike is one of these guys, salt of the earth guys, What do you think of Whitey? He’s a pro. That was the end of the conversation. That’s what I think. He’s right.

Q. Woody came off the bench for the very first time. I assume you’re going to keep doing that.
COACH McCAFFERY: Woody will be back in the starting lineup.

Q. (Question about starting the seniors)
COACH McCAFFERY: A couple days ago. I don’t usually do that. I don’t usually do that. We talk about what we just said. Senior days can be tricky. You start starting guys that haven’t been starting, you know, it can be real problematic for you. It’s interesting. When I told the guys today in practice that I was going to do this, the first thing Gabe did was go give Woody a hug. That’s the relationship that they have. That’s something special about our team.

Q. Aaron was struggling with his perimeter shots. Has he done anything different?
COACH McCAFFERY: No. The thing about it is, he works on it all the time. I think sometimes you see him go in a little bit, he feels more comfortable shooting it. He’s scoring in a lot of different ways now. I think that’s what really makes it difficult for the opposition.

Q. Did anything change in White’s demeanor?
COACH McCAFFERY: Nothing really. Let me say this. Maybe the worst game of his career was when we played Northwestern last time. I think that determination, I’m not going to play like that again.

Q. Few years ago, Gatens had that tremendous run. Is Aaron on that kind of stretch?
COACH McCAFFERY: Different kind of run. Different kind of player. The way Matt Gatens was shooting the ball, it made it fun for us as a coaching staff. We made different plays for him, finding ways to get him open, get him shots. Whitey is a different kind of guy. We play him in the low post, the wing, the high post. We brought him out. Play him at the point of the press, the back of the zone. That’s the beauty of him.

Q. Might have a double bye.
COACH McCAFFERY: Obviously it makes a big difference. You want it. Don’t have to play on Thursday. Let other teams kind of get after it. If we play on Thursday, we’ll be ready to go.

Q. The season is such a grind, six months counting practices, the last couple weeks in particular, the road trips you’ve taken, yet you have stayed locked in throughout. What is it about your team?
COACH McCAFFERY: We have an experienced group. You would expect them to be locked in and understand. I think as coaches we’ve been really cognizant of how hard we go. We haven’t really gone long, we haven’t gone hard. Film sessions and getting some shots up, a little run through, a little work on the zone offense, out the door. Get them in the cold tub. Do a workout with Bill Maxwell, keep them loose. That’s how you can keep them physically where they are. I think that’s way more important, where are they physically, where are they mentally. You can overcoach at this time of year.

Q. (Question regarding the senior class.)
COACH McCAFFERY: When you come into a new situation, like I did here, you’re scrambling when you first get here. I didn’t know what Basabe was going to do, Marble, McCabe. Two other guys went other places. We signed Bryce Cartwright at the end of June. The first time I met Bryce was when he got off the plane. Different kind of animal. But when you have a chance to be in a place and start recruiting and go visit people and watch them in the summer, develop a relationship with them like we did, then they decide to come, they pull the trigger, say, `I believe in coach, I believe in what he’s got going on.’ It doesn’t happen like that all the time. A lot of guys are like, I want to sit back and wait and see what this guy does. They jumped on it. When you have guys that never have any issues academically, do what they’re supposed to do, take care of their business, that’s what makes this business fun. Thank you.