Iowa Out to Make Noise in Chicago 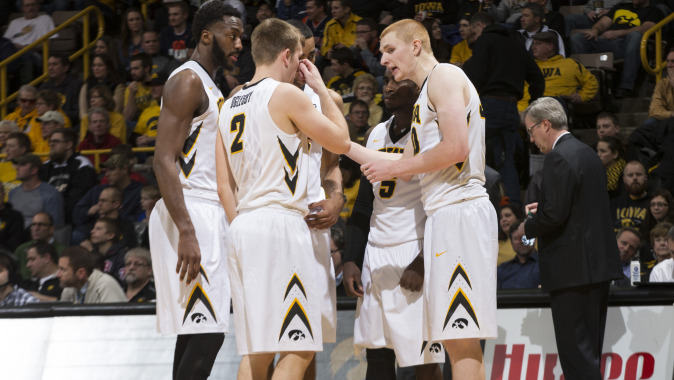 IOWA CITY, Iowa — It’s the win or go home time of year in college basketball, and University of Iowa senior Aaron White believes the Hawkeyes have the pieces to make some noise and make it a weekend at the 2015 Big Ten Tournament in Chicago.

“I think we have the roster and players that can make a run in this tournament,” said White, who was named first-team All-Big Ten by the league coaches and media Monday. “It all starts Thursday.

“You don’t talk about the fourth day (winning four games in four days) you talk about the first one. Anything can happen. I like the way we’re playing and I like our team.”

The Hawkeyes are a loose, confident team heading into Thursday’s game in the United Center against the winner of the contest between No. 12 Nebraska and No. 13 Penn State. Iowa brings a six-game winning streak into the postseason — the second-longest current streak in the conference.

A season ago, the Hawkeyes limped into the postseason, losing five of their final six games of the regular season en route to being a No. 6 seed at the Big Ten Tournament in Indianapolis. Iowa was upset in its first-round game, falling to 11th-seeded Northwestern.

“Coming in on a six-game winning streak instead of the skid is different,” said White. “Our confidence is higher. It’s a totally different mood than last year at this point.”

Winning cures everything (or most things), but the Hawkeyes’ confidence stems from being a team that has worked through various lulls throughout the year to succeed. It translated to 21 regular season victories, including 12 in Big Ten play to finish in a three-way tie for third place in the league standings.

“Throughout the year we’ve had things that hindered or hurt us in specific games, but as we’ve grown as a team, we’ve fixed each thing,” said White. “In the beginning it was second halves, then our defense (struggled) for a week, and for a while, we couldn’t score and shot low percentages.

“We have put it together, and we’re clicking right now. It’s good we’re getting better and learning from our mistakes.”

The growth comes from having a team filled with upperclassmen. Seniors like White, Gabriel Olaseni, and Josh Oglesby have been through the battles, and juniors Mike Gesell, Anthony Clemmons, Adam Woodbury, and Jarrod Uthoff have played and learned each step of the way.

“We are locked in,” said Oglesby. “Now we want to make some damage in the Big Ten and NCAA Tournaments. It is about staying focused and doing what the coaches say.”

It’s another year, another opportunity for the Hawkeyes, but this one feels different.

“There is a different mood,” said Oglesby. “When you’re on a losing streak, everyone is asking what’s wrong? To be able to go into the postseason with a winning streak, it’s a lot more fun.”

Thursday’s Big Ten Tournament opener is scheduled to begin at approximately 1:30 p.m. (CT) or 25 minutes after the conclusion of the day’s opening game. The contest will be televised on BTN with Kevin Kugler, Jim Jackson, and Mike Hall on the call.