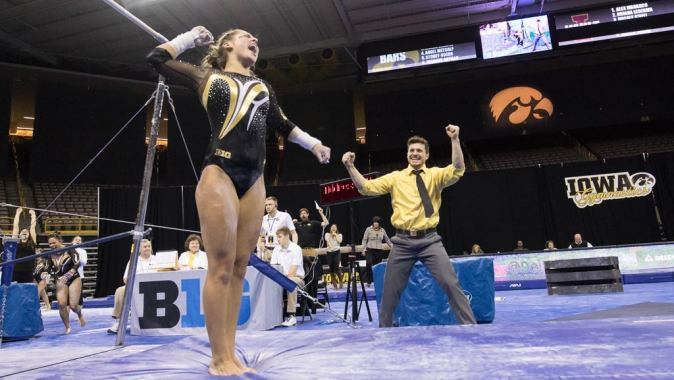 THIS WEEK:
Iowa will travel to Minneapolis, Minnesota, to take on No. 6 Michigan, No. 20 Minnesota, No. 12 Penn State, and Rutgers in the Big Five Meet on Saturday. The meet is scheduled to begin at 4 p.m. (CT) inside the Sports Pavilion. The meet will serve as the Big Ten Qualifier and decides which session the teams will compete in and the rotation order for the Big Ten Championships on March 21 at the Crisler Center. The top three teams at each Big Five qualify for the evening session at 3:30 p.m., while the lower two teams will compete in the morning at 10:30 a.m.

BIG TEN BROADCAST:
The meet will also be streamed live on BTN2Go. Lisa Byington (play-by-play) and 2008 Olympic medalist Shawn Johnson (analyst) will be on the call. The meet will be available on Big Ten Net- work on tape-delay on Sunday, March 15 at 2:30 p.m. (CT).

LAST TIME OUT:
The GymHawks defeated Iowa State, 195.775-195.175, in their home finale on March 6. The win is the first for the GymHawks over the Cyclones since March 8, 2013. Three senior GymHawks ended their careers on a high note, earning a total of five career bests to highlight the competition. Leading the pack was Senior Sydney Hoerr with a pair of bests on vault (9.800) and floor (9.925). Hoerr’s performances earned her a first place title on floor, a fourth place overall on vault, and a fourth place result in the all-around. The GymHawks moved to bars where senior Johanny Sotillo led the GymHawks, posting a career best score of 9.900. Sotillo’s performance was enough to earn her a first place title in the event. Hoerr followed closely behind her teammate, tallying a score of 9.825 and finishing third overall in the event. The GymHawks closed the night on floor with a score of 49.000, giving them a final team score of 195.775. Hoerr earned her second career best of the night, posting a score of 9.925. Senior Caitlin Tanzer tallied the last season best of the night, tallying a 9.725.

HEAD COACH Larissa Libby:
Larissa Libby is in her 11th year as head coach, and 15th year overall, at the University of Iowa in 2014-15. In 2014, six Hawkeyes were selected for NCAA Regional competition. Alie Glover, Angel Metcalf, and Sydney Hoerr were selected as all-around competitors, while Jordyn Doherty competed on vault and Mollie Drenth competed on floor. Maryah Huntley was selected as the alternate behind Drenth on floor. Libby coached Hoerr to second team All-Big Ten honors, while Hoerr, Caitlin Tanzer and Glover earned Academic All-Big Ten honors. Libby led Iowa to its sixth- consecutive NCAA postseason appearance and the seventh in her tenure in 2013.

UP NEXT:
The GymHawks will travel to Ann Arbor, Michigan, to compete at the Big Ten Championships on March 21 at the Crisler Center. There will be two sessions, with four teams competing in each session, based on regional qualifying scores (RQS) from the Big Five Meet. The top three teams at each Big Five qualify for the evening session at 3:30 p.m. (CT), while the lower two teams will compete in the morning at 10:30 a.m.