Hawkeyes Head Out to Michigan, UNLV 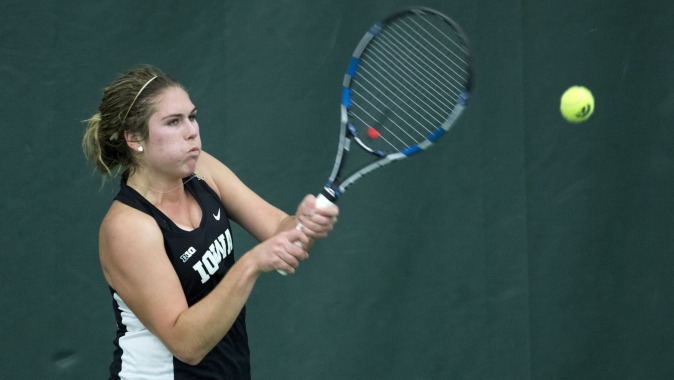 THIS WEEK FOR THE HAWKEYES
The University of Iowa women’s tennis team heads to Ann Arbor, Michigan to face Big Ten rival No. 13 Michigan on Friday. Action begins at 3:30 p.m. (CT) at the Varsity Tennis Center. The Hawkeyes then head to Las Vegas, Nevada for a head-to-head battle with UNLV on Tuesday, March 17, at 10 a.m. (CT).

GOING AGAINST THE WOLVERINES
Michigan leads the all-time series against Iowa, 36-12. During their last meeting, the Hawkeyes fell to then No. 17 Michigan, 4-1 in the final dual of the 2014 season. Iowa’s last win over Michigan was in 2006, a 5-2 victory over the 32nd-ranked Wolverines.

TAKING ON THE REBELS
This will be the first time in program history that Iowa will compete against UNLV. The Rebels are currently 5-6 overall and hold a 1-0 conference record.

MCCULLOCH MOVES TO NO. 2
Morven McCulloch has won three of five matches since moving to the No. 2 singles position. She has 29 career appearances at No. 2 and is 16-13 all-time.

TALCOTT ON TOP
Shelby Talcott holds a 7-2 record at the No. 1 singles position this season. She is playing at the top of the lineup for the first time since 2013, when she was 2-0 in limited action at No. 1. Talcott is 9-2 all-time leading off the lineup.

SENIORS DELIVERING
Iowa seniors Shelby Talcott, Katie Zordani, Ellen Silver and Morven McCulloch have a combined 23-10 singles record this season. Talcott and McCulloch are a combined 14-5 at the top of the lineup.

TAKING DOWN RANKED OPPONENTS
Last season, the Hawkeyes beat three ranked opponents, the most since coach Dougherty’s first season when Iowa overcame five ranked teams. The most recent win was against No. 42 Illinois, 4-3, in Champaign, Illinois.