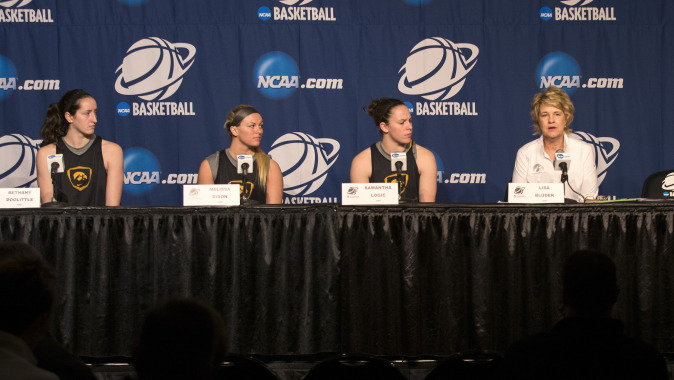 Lisa Bluder: We are very, very excited to be here, and I know everybody is this time of year. But I think this year is special for us for a number of reasons.

One is we earned the right to play at home. We have been very happy to play at home the last two years, but this year we had to earn it. We talked about that at the beginning of the year, and it’s really nice to see that happening this weekend. Another reason why it’s special is because of the three women that are up here with me. These three have been just a big part of our program the last four years and they have put in so much hard work to put themselves into this situation.

We know American is a great basketball team. They have not lost the entire month of February or March. You have to go back to January to find a loss on their schedule. They have won 11 straight.

I think Megan Gebbia in two years has done a great job with the basketball program at American and bringing them to their first NCAA Tournament. I’m hoping that experience, the home court, will help us, because we understand — you know, very good scorer in Jennifer Dumiak; they have a great three-point shooter in Zimmerman, and we know it’s going to be a very, very good basketball game tomorrow. I mean, they are holding opponents to 57 points, so a very, very good defensive club.

Q. Does American remind you of anybody that you’ve played, some team that we could figure out?

Lisa Bluder: I’ll probably take that because I’ve seen more than they have.

This goes back a long time, but these guys remember playing Marist last year in the first round of the NCAA Tournament. Megan came from Marist, she was a long-time assistant coach there.

They run a lot of the same things, and they are very good at reading switches, reading screens, making you pay for not staying in your stance and having a mess-up basically on a screening situation, and they run a lot of unusual screen action.

So I know it goes back a year, but these guys remember preparing for that game very well.

Q. What sort of defenses do they like to play?

Q. You guys are 16-0 at home this year. Just talk about what it’s like playing in Carver and to have a chance of playing potentially two more games here.

Bethany Doolittle: Yeah, we are obviously really excited to find out we were hosting like Coach said. It was something that we really set our goals to at the beginning of the year, being a Top-16 team in the country, being able to play in front of our fans at Carver.

Obviously it’s been our best year at Carver, and we just want to look to continue that and that starts tomorrow. We can’t look too far ahead. We are just excited and we love playing in front of our fans.

Q. Playing a couple of the same opponents as American, does that help in preparation?

Lisa Bluder: Not really, because those opponents were so early in the season. We have two common opponents. We both beat Gonzaga; we both lost to Maryland. Again those are both in their non-conference season, and both so long ago, I don’t think it really affords either team much advantage.

Q. Melissa, have you guys watched much film at all on these guys?

Melissa Dixon: Yes, we have watched film on American.

Q. What sort of things do they like to do on perimeter defense?

Q. It’s been so long since you’ve played. How have you handled that? You don’t get breaks during the year; does it seem longer than a week and a half or whatever it has been?

Bethany Doolittle: I think last week we just focused on ourselves a little bit because we didn’t know who we were going to play. I think that was pretty beneficial in our preparation for this game on Friday.

So I don’t think it’s been a long time. It doesn’t feel like a long time because we’ve been practicing the whole time. I think that will help us out in this game Friday.

Q. For Sam, this is kind of an unusual position for Iowa. You guys are expected to win and you’re expected to advance to the Sweet 16. How do you sort of handle that mentally?

Samantha Logic: I mean, I don’t really think that our team really cares about what other people expect of us. We set our own expectations for every single game.

So whether we are seeded three or six or eight like we have been our four years, we go into every game expecting that we have a chance to win playing well enough.

So that’s the way you have to approach it; just thinking what we have to do and not really worrying about what other people are expecting you to do.

Q. Their leading scorer, I don’t remember her name right now, but she’s a guard. Can you sort of describe her game?

She’s really the key to the team. In my opinion, she’s a big key to their offensive success.

Q. Can you comment on — Sam just touched on it, but how important it is that this is another game, despite the seed; how important is it to keep your preparation the same as it’s been all year?

Lisa Bluder: Yeah, we’ve really tried to keep our preparation the same but it’s hard to say this is just another game.

And I almost don’t want them — I want them to understand, this is special. This is a great opportunity for us to be playing in a national tournament on our home court.

But our preparation as far as getting ready for the opponent and the amount of focus that we’ve spent in practice on them has been about the same as every other game.

Q. Earlier today, Coach Meier from Miami had some very kind words to say about both the University of Iowa’s athletic administration for their ability to stage events, and how intelligent the fans at the University of Iowa are about the game of basketball. Can you expand on that a little bit?

Lisa Bluder: First of all, I think our administrators have done an unbelievable job getting ready for this event.

The last two years, we knew we were going to host and we had a year to prepare for that, and that’s a lot different than having four days to prepare for an event of this magnitude and still making every athlete and every coach feel special and feel like it is a national tournament.

Kudos to our administration for not only getting ready, but also for embracing it and for wanting to have it here. We have the National Swim Meet going on at the same time. This is incredible for us to have to stage both of these events, and then to want to do it. It’s amazing.

So our administrators have done a great job.

As far as our Hawk fans, I know it’s a Friday tomorrow. I know it’s during the workday. I honestly believe they are still going to come out and support us. They have been great. We had almost 10,000 in our last game and they have been absolutely tremendous in supporting this team, and especially this group of seniors.

I think everybody realizes, you know, this is the last time you may see this group on this court, and that’s pretty good incentive to get out and support us, no matter what time of the day it is and no matter what day of the week it is.

I’m pretty sure they will show up. I hope they will. They have been so important to us all year and they know it, so I’m hoping that they will be here tomorrow at 1:30.