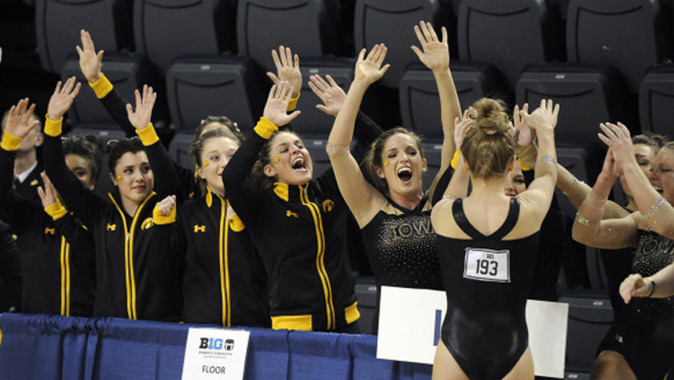 “I am absolutely ecstatic, over the moon. It was a great day,” said head coach Larissa Libby. “I honestly think we are just on the edge of our full potential. I think they have found a groove right now that they are comfortable in. They are very comfortable around each other and secure in the gymnastics that they are doing. So I think that helps them.”

Six conference teams entered the Big Ten Championships ranked in the GymInfo Top 25 poll; Michigan paced the conference at No. 6, followed by No. 10 Nebraska, No. 11 Penn State, No. 16 Illinois, No. 19 Minnesota and No. 24 Iowa.

Senior Johanny Sotillo took ninth place on beam (9.850) and collected a 12th place finish on bars (9.875). Rounding out the awards for the GymHawks is freshman Melissa Zurawski, who placed 26th on bars (9.825).

“We made mistakes today and the good thing is that when they make mistakes they don’t panic. They focus, they stay disciplined, and they are able to continue to move forward,” said Libby. “I keep saying they haven’t had their best meet yet, so to come to the conference championships and score a season high, we couldn’t have asked for more. We had some challenges today and we have dealt with challenges all year. We had to switch some people in and out, but the greatest thing about this team is that they never say die. I think that they are almost there, almost where they need to be and it is coming on at the right time.”

“In the end, we are just really proud of the job the team did today and that’s all we ask from them. They got their job done and the rest is out of our control,” said Libby. “We did what we came here to do. Our goal was for at the end of the meet, whatever happens, win or lose, we make sure that people recognize who we are when we come out of this competition. I think they did just that. “

Iowa gymnastics will find out if it has done enough to qualify for NCAA Regional competition on Monday afternoon. The selection show begins at 2 p.m. (CT) on ncaa.com.