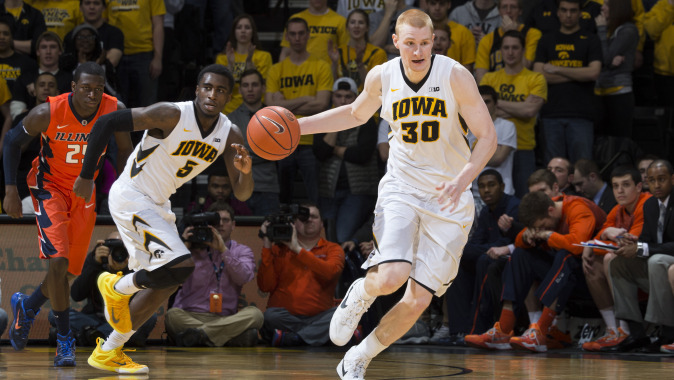 IOWA CITY, Iowa — University of Iowa senior forward Aaron White was named Friday to the National Basketball Association of Basketball Coaches (NABC) All-District 7 second team. The teams were selected and voted on by member coaches of the NABC.

White, who was also voted first team All-Big Ten and United States Basketball Writers Association All-District VI earlier this month, finished his collegiate career second in Iowa career scoring (1,859), third in rebounding (901), first in games played (140), free throws made (618) and attempted (800), and 14th in double-doubles (16). As a senior, White became only the second Hawkeye since 1984 (Greg Stokes in 1985) to lead the team in scoring (16.4), rebounding (7.3), and steals (1.3) in the same season. He is the only Hawkeye to ever amass more than 1,800 points and 900 rebounds. The native of Strongsville, Ohio, was the only player in the nation this season to average 16+ points and 7+ rebounds while also shooting better than 50 percent from the field (52 percent) and 80 percent from the free throw line (82 percent).

White (6-foot-9, 220 pounds) led the Hawkeyes to their second straight NCAA Tournament appearance and second round win over Davidson on March 20. The team co-captain was instrumental in helping Iowa win 12 conference games for the first time in 18 years and seven true road victories — the most by a Hawkeye team since 1987. During White’s four-year career, Iowa won 85 games, which ties for the sixth most in program history.

Iowa finished its season 22-12 overall and tied for third place in the Big Ten with a 12-6 mark. This season marked the third straight year UI head coach Fran McCaffery guided the Hawkeyes to 20 wins or more.