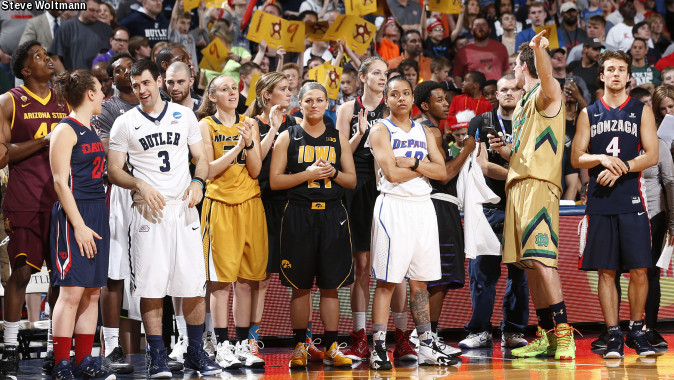 The 27th annual event played out in front of a sell-out crowd of more than 9,100 fans at Hinkle Fieldhouse in Indianapolis.

“The last couple of days in Indianapolis have been an awesome experience,” said Dixon. “I am so glad I was able to be part of this. I met a lot of great people, and it was so awesome to put the Hawkeye jersey on one last time.”

Dixon, a senior from Johnsburg, Illinois, earned second team All-Big Ten honors this season. She leads the nation in 3-pointers per game (3.65), becoming the first Big Ten player ever to lead the country in 3-pointers per contest, and just the seventh from a major conference school. Dixon ranks sixth nationally, and second in the Big Ten, in 3-point shooting percentage (45.1%; 124-275).

The team co-captain is Iowa’s record-holder for 3-pointers in a career (334), season (124), and game (10). The Big Ten single-season record for 3-pointers entering this season was 112. Dixon and Ohio State’s Kelsey Mitchell (127) both surpassed the record this year.

Earlier this year, Dixon set a new program record with 10 3-pointers in Iowa’s win at Drake, finishing two shy of the NCAA and Big Ten record. Dixon set or tied the arena record for most 3-pointers in a game in at least five venues this season (Drake, Rutgers, Illinois, Northwestern, and Iowa).