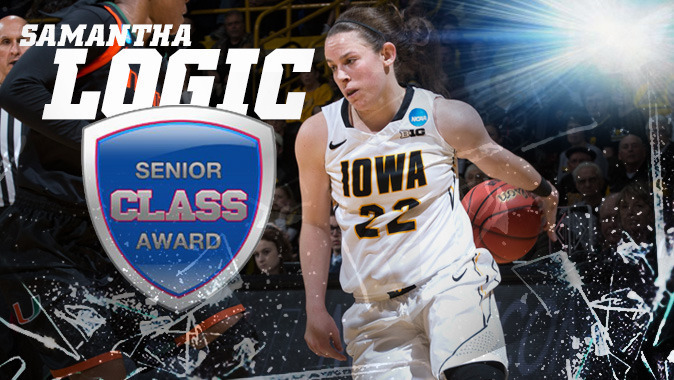 OVERLAND PARK, Kan. — Two-time AP All-American Samantha Logic of the University of Iowa has been selected as the 2014-15 Senior CLASS Award® winner in NCAA® Division I women’s basketball.

“What the Senior CLASS Award entails makes it special because it encompasses everything you’ve done in college on and off the court and in the classroom,” said Logic, who finished her career as Iowa’s all-time career assist leader. “It is such an honor to be recognized for all aspects. Our team does such a great job of staying active in our community, and knowing that we made time to give back to the Iowa City community will stick with me moving forward.”

On track to graduate in May with a GPA of 3.75, Logic has been a consistent force for the Hawkeyes both athletically and academically during her four years on campus. This season, her pursuit of classroom excellence earned her a spot on the Capital One Academic All-America team and led to her third consecutive Academic All-Big Ten honor. On the court, Logic, who finished her career as the NCAA active career assists leader (898), etched her name in the record books by becoming the only player in NCAA history to accumulate at least 1,500 career points, 900 rebounds, 800 assists and 200 steals. For her hard work, she was named a third-team AP All-American, second-team ESPN All-American and USBWA All-American and also earned her second consecutive unanimous first-team All-Big Ten nod.

“The Senior CLASS Award is a very special award as it goes to the senior that embodies the entire package,” said Iowa Head Coach Lisa Bluder. “Sam has received many awards over the past couple of weeks, but this one is exceptional due to what it stands for. And the fact that the Hawkeye fans were part of this selection also sets it apart.”

Over the course of her Hawkeye career, Logic extended herself in service to others and earned a reputation for humility among the Hawkeye community. By taking part in community service efforts with organizations such as Habitat for Humanity and Ronald McDonald House, serving as a role model for her teammates and competing with integrity and heart, she gained the respect of her coaches, opponents, teachers, fans, media and league officials.

“Samantha is everything you want in a Senior CLASS Award winner–academics and athletics with strength of character, leadership and service,” said Erik Miner, executive director for the Senior CLASS Award. “She worked just as hard to get assists as she did to score points, which shows the kind of character and team-focused attitude that truly deserves to be honored.”

ABOUT THE AWARD
An acronym for Celebrating Loyalty and Achievement for Staying in School, the Senior CLASS Award honors the attributes of senior student-athletes in four areas: community, classroom, character and competition. The award program is designed exclusively for college seniors who are utilizing their complete athletic eligibility, remaining committed to their university and pursuing the many rewards a senior season can bring. Premier Sports Management manages the award.